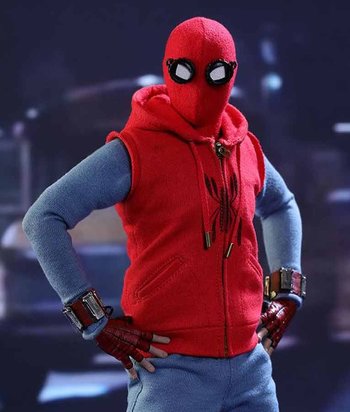 You look amazing, Spider-Man!
Brian Douglas: What gives you the right!? What's the difference between you and me!?
Batman: I'm not wearing hockey pads!
— The Dark Knight
Advertisement:

A costume that looks shoddy and inexpensive, for a variety of reasons. Maybe the hero has to go into action, but doesn't have access to his official costume; so he contrives a shoddy emergency costume. Or, an imitator may want to look like the hero and fail, since he doesn't have the budget to make up a nice costume (This might lead to an I Am Spartacus scene). Or, it is Halloween, and some characters dress up extravagantly but one cannot afford anything more than a potato sack. Usually Played for Laughs. Sometimes it's even meta in that the show itself doesn't have budget for good costumes.

Not to be confused with Beta Outfit which describes the common evolution of superhero attire as they start out with a sort of "dime store" version of their iconic costumes only to switch to their proper costumes at a later point.

The logical opposite of Impossibly Cool Clothes. Often overlaps with Rummage Sale Reject, sometimes with Costume Copycat, or with Your Costume Needs Work, which is about the hero's real costume being perceived as an unconvincing imitation. Compare Improvised Clothes, Brown Bag Mask, Civvie Spandex.