For the Want of a Nail Series: Deku? I think he's some pro... | Mastermind: Strategist for Hire | Mastermind: Rise of Anarchynote sequel to Strategist For Hire unrelated to the series | Viridian: The Green Guide | Cheat Code: Support Strategist | Shadows: The Horror Movie Heroes | Erazerhead: The Unknown Hero 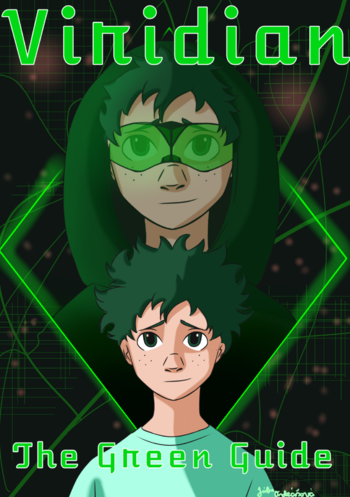 After his dream is finally crushed, Izuku isn't quite sure there's anything left for him to live for, but... he can't exactly kill himself either, not without hurting the people he cares the most about. So, when he realizes that the quirkless can't technically be vigilantes, it seems like the best of both worlds. He'll be able to save people even without being a hero and, if he happens to die while he’s at it... well, like Kacchan said, maybe he'd be born with a quirk in the next life.
Advertisement:

Viridian: The Green Guide is a My Hero Academia fanfic by myheadinthecloudsnotcomingdown. It can be read on Archive of Our Own here

Not to be confused with Viridian, a fic by a different author.

This fic has been completed as of August 6th 2021.