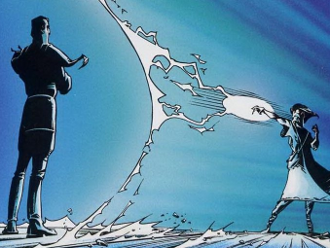 Ysalamir: 1, Dark Jedi: 0
"Well, at least all that arm-waving and arcane babbling you did was impressive."
— Remand

The ability to completely negate magic or other supernatural effects. The power is not absorbed or reflected, it simply ceases to be when it comes within the radius of effect. This will usually be an extremely rare, nigh-unheard of, game-breaking power: the greatest of wards become undone with incredible ease, with unforeseen effects.

It can be Blessed with Suck if this means White Magic doesn't work on you either. No magical healing or protection in this case. If the world runs on Magic, this person may be a pariah, especially if it's a power that they can't control.

Groups of people who make use of this ability generally exist for the purpose of stopping magic-users; they may be an Anti-Magical Faction, Witch Hunters, Vampire Hunters (in the event that vampires use magic, which they usually do) or just regular old Mage Killers. Depending on how magic is viewed in the setting, they may be seen as heroes or villains. As this power isn't of much use where there is no magic, it counts as a subtrope of Meta Power.

For an item that keeps the enemy from using their abilities for a period of time, see Power Nullifier. For stopping a specific spell while it's being cast with another spell, see Counterspell. For reversing the effects of magic, see Dispel Magic. Similarly, the Kryptonite-Proof Suit can be used to resist the Kryptonite Factor. Compare Walking Techbane, where someone has this effect on scientific technology. Contrast No-Sell, when characters can ignore (rather than nullify) the powers of others or their defenses. Mage Killers often weaponize this ability. Un Sorcerers often have this; in fact, that might be why their own powers don't work. Contrast Weak to Magic. See also Resistant to Magic.

Black Rock is a substance that blocks out a lot of paranormal frequencies, making it excellent material for containing OoPs. Darling calls it paranatural lead.

Black Rock is a substance that blocks out a lot of paranormal frequencies, making it excellent material for containing OoPs. Darling calls it paranatural lead.