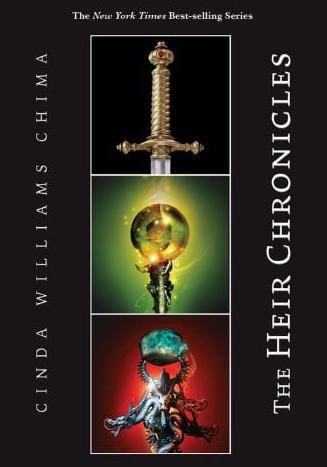 The Heir Chronicles by Cinda Williams Chima currently consists of five books: The Warrior Heir, The Wizard Heir, The Dragon Heir The Enchanter Heir and The Sorcerer Heir.
Advertisement:

The Warrior Heir follows Jack Swift, who is set apart only by his scar and the medicine he always, always must take. And then one day, he doesn't, leading to a sudden surge of unexpected power that nearly kills someone during soccer tryouts. Soon, he is caught up between the Roses, rival houses whose struggle for superiority entails a fight to the death. Specifically, Jack's.

Seph McCauley takes the stage in The Wizard Heir. A Walking Disaster Area unable to control his powers, being enrolled in the Haves seems like a dream come true. He is, of course, wrong. While he is offered training to learn how to use his magic and entrance into a mysterious guild of wizards, the offer does not come without strings.

In The Dragon Heir, Trinity finds itself under siege. Everyone but Jason Haley has a part to play, or so he feels. Then he finds a huge opal called the Dragonheart, which leaves him awash in power. Power that not only he feels, as the talisman calls out to lure Madison Moss into delivering it to Trinity's enemies.