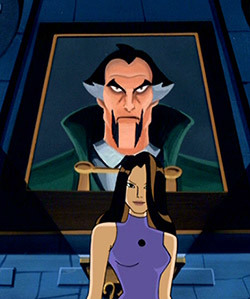 A crafty, cruel, and cunning villain. Just like her father.
"Rather than simply being an attractive stage prop, make sure that you know every detail of the running of the Evil Empire, so that if anything unpleasant happens to Daddy, the transition of power will go smoothly. Then make sure that something unpleasant happens to Daddy."
— #14. of the guide for the "Wicked but Beautiful Daughter"

She's the daughter/niece/granddaughter/etc of an Evil Overlord, who shares said Evil Overlord's ambition, cunning, and cruelty. She could be anything from a simple Spoiled Brat to an Overlord in waiting. She's also likely to be a Princess (since even villainy is improved with that), although she will still prefer wearing black or dark colors over pink.

Viewers should neither expect her to be The Ingenue nor expect a Heel–Face Turn from her, even if she falls for the hero. That would more be her just wanting him for herself than willingly joining his side; she'll want him to willingly join her side (and his refusal is likely to inspire Woman Scorned, however little reason she had to believe that he might accept).

She is more likely to be a Dark Action Girl than a Dark Magical Girl, because the latter has a high chance of becoming good after her Magical Girl counterpart defeats her in combat or otherwise convinces her to switch sides with The Power of Friendship. On the other hand, she is prone to Revenge by Proxy subjected by an Anti-Hero in a darker setting.

If she's above a certain age, she is going to be hot, often a cooler character than the female lead, and might wear less. If the bad guys are the Yellow Peril or otherwise "Asian-themed", expect her to be a Dragon Lady.

If her father is defeated, she will be the one doing the avenging. On the other hand, she might get impatient waiting for Mommy and Daddy to die so she can take their place. In this case, she might decide to become a Self-Made Orphan and The Usurper all at once. In the meantime, mom or dad might give her a first rate education by sending her to the Academy of Evil. If it turns out her Evil Parents Want Good Kids, expect a disappointment. To correct this acquired morality they may send her to a Superhero School.

Compare Mad Scientist's Beautiful Daughter (who may or may not be evil), The Evil Prince, Protected by a Child, and Even Bad Men Love Their Mamas.

With the mural revealed, Hela describes how she assisted her father Odin in a brutal subjugation of the Nine Realms.

With the mural revealed, Hela describes how she assisted her father Odin in a brutal subjugation of the Nine Realms.