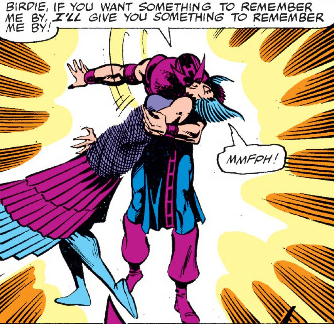 "Someday, I'll catch him, then I'll be the one kissing HIM triumpthantly!"
— Bud Buckwald, on his arch-enemy El Coyote, Bordertown
Advertisement:

So, you've got your enemy on the ropes (literally or figuratively) and you feel the need to really rub it in that you've won. Or, your enemy's got you on the ropes and it's time for desperate measures to turn things round. What should you do? In fiction, one option is the Take That Kiss. (TV Tropes makes no guarantees for how well this works in Real Life, so Don't Try This at Home—or at least, don't come crying to us if you do and it fails or backfires.)

Whereas the Take-That Kiss is sometimes the most blatant expression of Foe Romance Subtext, it also can be the only thing in the characters' exchanges that suggests romantic interest at all. It will typically be more of a taunting/patronizing/desperate/tricksterish/arrogant domination display than a romantic/sexy come-on—though it's quite often played as an ironic version of a come-on, or possibly some kind of complicated double-bluff.

For related reasons, it's usually not a "Shut Up" Kiss, at least of the core variety that leads to two characters finally getting together, if only for a while, and no slapping need be involved, before or after. If there is UST or Belligerent Sexual Tension though, expect this trope to feature somewhere, at least as long as one of the parties is Genre Savvy enough to pick up on it.

The idea isn't necessarily specifically to mock or antagonize, though. It usually seems more like a non-verbal Take That!, though not always aggressive or hostile, and can be more of an affectionate sending-up or one-upping.

In effect, the "message" can range from "Try anything else, and I'll pull the plug on your career as well as make fun of you in public," (the Riget example, below) through "I'm not going to let your hostility stop my aggravating exuberance," (Bugs Bunny, Woody Woodpecker) to "So you just told a memorable fable about the problem of evil that explicitly challenges all I'm thought to stand for, and now you're expecting a counter-argument? Well, actually, I'm just going to do something ambiguous and non-verbal that will nonplus you and everybody else," (The Brothers Karamazov).

Though this is most commonly pulled by villain(ish) characters, it can also be done by a Designated Hero, or (as in the Heathers and Riget examples) by characters whose morality tends to the ambiguous. Examples of full-on good characters doing this are more rare—but see The Brothers Karamazov examples.

If that all seems a lot to read into an ambiguous and often completely non-verbal act, that hopefully just proves the point, but feel free to intone Bellisario's Maxim if desired.

A common variant is for a character to kiss someone as a Take That! to some third party. The message here is typically, "No, I'm not into you, and I'll prove it by randomly kissing whoever happens to be available because I'd rather have anyone else but you." Alternately, it could be part of an Operation: Jealousy, sending the message "If you don't make your move, you'll have to watch me mack on some other lucky bastard."

Blowing kisses can be a way of achieving a similar, if milder, mocking effect at a safe(r) distance. Compare Terms of Endangerment.

See also the more metaphorical type of Kiss of Death, which is rather stronger than just saying Take That!. Also compare and contrast Kiss of Distraction, where the intent is not to taunt but to confuse.

Zorro steals a kiss from Elena while they're fighting to provoke her.

Zorro steals a kiss from Elena while they're fighting to provoke her.