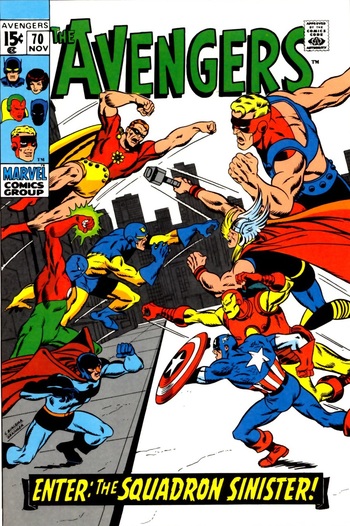 Totally not evil knockoffs of the Justice League, we swear!
"In this classic tale, Lupin comes up against the only man who may be able to stop him . . . no less than the great British gentleman-detective Herlock Sholmes! Who will emerge triumphant?"
— Blurb for Arsène Lupin versus Herlock Sholmes, by Maurice Leblanc
Advertisement:

There are some crossovers that are blindingly obvious, but can never quite get off the ground. Maybe one of the creators didn't like the idea, maybe the characters are owned by different companies that can't make a deal, maybe it just got stuck in Development Hell somewhere along the way. Regardless, one side of the crossover still wants to do it enough that they're willing to bend the rules a little bit to make it happen. After all, what does it matter if it's not Superman that's punching Captain America in the face for the vaguest of reasons, but Duperman?

A Spiritual Crossover is what happens when a Fake Crossover meets Spiritual Adaptation. The characters created as a result may vanish after fulfilling their crossover purpose, or they may stick around, since they're owned by the same company and there are thus no restrictions to their use.

This may involve a Cast of Expies, in case there are several individual characters copied from a different work or works instead of just one. Also, do not be surprised if these newly-made characters are made a little more villainous than their original versions just to pour some more salt on the wound.

Compare/Contrast Captain Ersatz and Expy, which are about individual clones of another company/writer's character that aren't necessarily involved in any sort of Crossover plot. Do not confuse with the aforementioned Fake Crossover, which is actually about genuine crossovers that don't count in the chronology of one or both franchises involved.