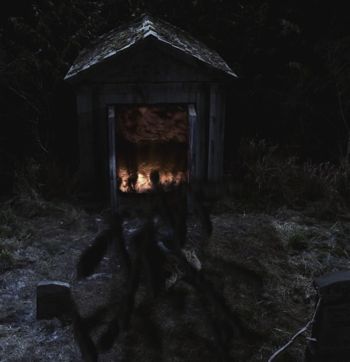 That's a devil's gate. A damn door to hell. Come on! We gotta shut that gate!
Sam: I kinda can't believe it, Dean. I mean, our whole lives, everything has been prepping for this and now I...I kinda don't know what to say.
Advertisement:
Dean: I do. That was for our mom, you son of a bitch.

Dean makes a deal with a crossroad demon to bring Sam back from the dead. The Winchesters and other hunters try to stop the Yellow-Eyed Demon from opening a gate to hell in the Red Desert in Wyoming.

Sam's dead body lies on a torn bare mattress as sun shines through the windows of the room where Sam had found the Bowie knife in the ghost town of Cold Oak, South Dakota.

Dean stands next to Sam's body. Bobby Singer enters the room with a bucket of Sandy's chicken and two bottles of cola. When Bobby urges Dean to eat, Dean says he is fine, and takes a drink from a bottle of whiskey. Bobby gently suggests that it is time to bury Sam's body, but Dean is not ready. Bobby asks Dean to come with him and says he could use Dean's help for the showdown with the Yellow-Eyed Demon, but Dean says he is done and tells Bobby to leave. When Bobby says he does not want to leave Dean alone, Dean shouts at Bobby and shoves him, but ends up apologizing and again asks Bobby to go. Bobby says, "You know where I'll be." Dean remains alone with Sam's body as a tear runs down his cheek.

The Teaser ends with a metal chomping sound, and the Title Sequence plays in a burst of flames.

Dean is still sitting by Sam's body with a candle burning in the corner of the room. Dean tearfully talks about wanting to protect Sam and how he fails everyone he loves. He ends up shouting, "What am I supposed to do?" Next we see the headlights of the Impala, as Dean speeds down a gravel road. Dean stops at a crossroad and puts various items from the weapons locker in the Impala's trunk in a tin tobacco box, including a fake ID with his photo on it. Dean buries the tin box in the center of the crossroad with his hands. After making him wait, the Crossroad Demon appears in a low cut black dress. She realizes Dean is desperate, and rejects his offer of his soul in 10 years for Sam's life. Dean continues to offer less time until his bill comes due while the Crossroad Demon teases him and reminds him of his brother's death and his father's deal. She finally accepts Dean's soul in one year for Sam's life, but reminds Dean that if he tries to weasel out of his part of the deal, Sam drops dead. They kiss, sealing the deal.

Sam wakes up in the candlelit room in Cold Oak as sun streams in through the windows. He examines a red scar over his spine in the mirror as Dean enters the room. Dean crushes Sam in a hug, which causes Sam to wince in pain. When Sam asks what happened, Dean tells him that Bobby patched him up. Sam wants to hunt down Jake, but Dean convinces him to eat something. While they have a breakfast of pizza, fried chicken, and Chinese food, Sam fills Dean in on what happened at Cold Oak and that the Yellow-Eyed Demon only wanted one of the Special Children to survive. Dean says they must have left Sam for dead and thought it was over. When Sam asks Dean if he called the Roadhouse for information, Dean is forced to tell Sam about the fire at the Harvelle Roadhouse and Ash's death. When Dean mentions that Bobby is working on finding out what Ash discovered, Sam wants to take off for Bobby's, even though he is still clearly in pain from the wound in his back. Dean tries to convince Sam to give himself time to heal, but Sam insists, and they drive off in the Impala.

Bobby opens his door at his home in Sioux Falls, South Dakota.

He is shocked to see Sam standing next to Dean, but Bobby plays along when Sam thanks Bobby for patching him up. Bobby tells them about a tidal wave of demonic omens which are all surrounding an area in Southern Wyoming.

He asks Sam to look at his findings while he and Dean lug in some books from his truck. Bobby uses this as an excuse to confront Dean, and Dean tells him about the deal he made. Dean begs a tearful Bobby not to tell Sam about the deal, when they hear a crashing noise in the junkyard and hide behind a wrecked car. They grab the intruder who walks by the car, and realize it is Ellen Harvelle. Dean hugs her, relieved that she survived the fire at the Roadhouse.

Back in Bobby's house, Bobby insists that Ellen drinks a shot of Holy Water to prove that she is not a demon. They then asked her how she survived, and she says she was not meant to, but she left on a 15 minute errand to get pretzels. While she was out, Ash called her and told her to look in a hidden safe in the basement before the call was cut off. By the time she returned, the Roadhouse was in sky-high flames and a lot of good people had died. Ellen was able to retrieve a document from the secret basement safe after the fire, and she now pulls it out to show Sam, Bobby, and Dean. It is a map of Wyoming with 5 X's marked over the Red Desert. After doing some research, Bobby realizes that each of the X's on the map represents a frontier church which are connected by iron railroads built by Samuel Colt. These create a pentagram and a massive 100 square mile Devil's Trap. Sam confirms that the demonic omens Bobby had discovered seem to be surrounding this area, suggesting the Devil's Trap remains intact. Dean says the only thing he can find in the center of this Devil's Trap is an old cowboy cemetery. Bobby says a full blooded demon would be unable to cross the boundaries of this trap, which prompts Sam to say, "But I know who could".

Jake stops his car in front of a railway crossing, gets out, and looks around. The Yellow-Eyed Demon appears behind him and tells him that Jake needs to go to a crypt in a cemetery about 50 miles beyond the railroad. The Yellow-Eyed Demon then takes out the Colt, a gun which is said to be capable of killing anything, and tells Jake that the Colt is capable of killing the demon and that the gun is also the key to opening the crypt. He then hands the Colt to Jake, who immediately points the gun at the demon, although his hand shakes. The Yellow-Eyed Demon dares Jake to shoot him and then proceeds to remind Jake that by helping the demon he will be getting an army to command as well as ushering in a new world where Jake and his family will be royalty. Jake lowers the gun.

It is now nighttime, as Jake walks into the Fossil Butte cemetery. He is greeted by Sam, and Jake is astonished that Sam is alive. Dean, Bobby, and Ellen, then step out from behind gravestones with guns pointed at Jake. Jake uses his newly gained psychokinetic ability to force Ellen to point her own revolver at her temple, while Jake's eyes briefly flash yellow. He then demands that everyone else drops their guns or he will force Ellen to shoot herself in the head. Dean, Bobby, and Sam, reluctantly put their guns on the ground despite Ellen 's command that they shoot Jake instead. Jake then turns toward the crypt, pulls the Colt out of his pocket, and places the barrel of the Colt in a lock surrounded by a Devil's Trap on the door of the crypt. As soon as Jake turns his back on the others, Sam and Bobby grab Ellen and pull the gun away from her head. Jake is shot 4 times in his back as he unlocks the Devil's Gate. He then falls to the ground, and Sam stands over him as Jake pleads for mercy. Sam shoots Jake 3 more times in the chest, and blood splatters Sam's face. Dean pulls the colt from the lock in the crypt, but the portal to Hell has already opened. As Sam, Dean, Ellen, and Bobby, hide behind tombstones, black smoke with bursts of light explode from the crypt with some outlines of figures appearing in the smoke.

For this episode = 2 humans and 1 demon. This includes the death of one of the Special Children.