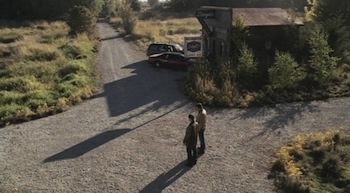 Crossroads are where pacts are made. These people are actually making deals with the damn thing. You know, 'cause that always ends good.
Sam: So, it's just like the Robert Johnson legend, right? I mean, selling-your-soul-at-the-crossroads kind of deal?
Dean: Yeah, except that wasn't a legend. I mean, you know his music. [Sam shrugs] You don't know Robert Johnson's songs? Sam, there's occult references all over his lyrics. I mean, "Crossroad Blues"? "Me And The Devil Blues"? "Hellhound On My Trail"? The story goes, he died choking on his own blood. He was hallucinating and muttering about big evil dogs.

are dying after seeing black dogs.

Sam and Dean hear about an architect, Sean Boyden, who reported seeing a black dog before he jumped to his death off a high rise he built. They travel to Greenwood, Mississippi and start investigating any reports of black dogs. Dr. Silvia Pearlman, who used to frequent Lloyd's Bar—where Sean Boyden was a bartender—also reported seeing a black dog and recently disappeared. Both Sean and Silvia had remarkable success in their careers starting ten years ago. When the Winchesters investigate the bar, they find yarrow planted outside and items used in summoning rituals buried under the crossroads in front of the bar. They realize these people have made deals with a Crossroads Demon and are now being dragged to Hell by hellhounds.

They track down the man in the photo buried under the crossroad, George Darrow. He has become a talented painter, but did not achieve fame or wealth. He admits to summoning the demon, and accepts his fate of going to Hell, but is holding off the hellhound with Goofer dust

until he finishes his last painting. Realizing he doesn't want their help, the brothers track down Evan Hudson, who George says also made a deal with the demon. Evan tells them that he gave his soul so that his wife would be healed of her cancer. Dean plans to summon the demon, trap it, and try to get it to call off the hellhound, while Sam defends Evan. Sam has misgivings about the plan, saying that he knows that this is, for Dean, really about their dad's death; Sam's been thinking that their dad made some kind of similar deal for Dean; he knows Dean's been thinking it, too; and he doesn't want Dean blaming himself for their dad's death. Dean says they don't really have other options at this point and leaves. Sam stays to hold off the hellhound with the Goofer dust that George gave them.

Dean goes back to the crossroad and—despite Sam's earlier protests, accusations, and fears—summons the demon. He offers her his soul while luring her to his car, where he had drawn a devil's trap. The demon discovers the trap and decides to wound Dean by telling him how John Winchester suffers in Hell because he gave his soul for Dean's life. Dean acts as if he will trade his own soul for his father, but is actually luring the demon into a second devil's trap. Dean begins to exorcise the demon, stopping only when she agrees to release Evan from his contract. Dean almost finishes the exorcism, but keeps his word and breaks the devil's trap. The demon pours out of the vessel as a cloud of black smoke.

Later, back in the car, Sam asks Dean if he had actually considered taking the deal for their father, wanting to make sure that it was just a ploy the whole time. Dean changes the radio station and turns it up in response.

For this episode = 3 humans.