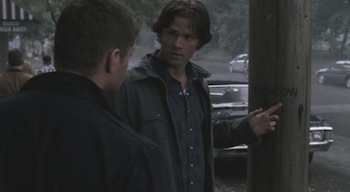 There were theories—Indian raid, disease, but nobody knows what really happened. They were all just gone. I mean, wiped out overnight.
Dean: I just think we should take a break from all this. Why do we gotta get stuck with all the responsibility, you know? Why can't we live life a little bit?
Advertisement:
Sam: Why are you saying all this? [pause, Dean turns and starts walking away] No, no, no, no, Dean. You're my brother, all right? So, whatever weight you're carrying, let me help a little bit.

Dean and Sam are trapped in Rivergrove, Oregon

, a small town overrun by a demonic virus.

Sam and Dean follow up on one of Sam's visions: Dean killing a young unarmed man. They discover that Rivergrove, Oregon is being torn apart by Croatoan, a demonic virus that turns people into homicidal maniacs. The brothers attempt to defend themselves and the last of the survivors, but just as it appears that Sam has been infected, all the victims suddenly disappear. A blood test reveals that Sam isn't infected and they leave town. In the tag, Duane is revealed to be a demon: he contacts his master using the Goblet of Bloodnote beats AT&T and reports that Sam is immune to the virus. Dean reveals to Sam that he has been burdened by something their father told him just before he died, something concerning Sam.

For this episode = 4 humans are witnessed to die; the fate of the remaining townspeople is uncertain.