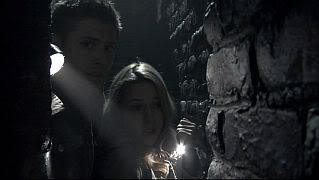 Ugh. Shoulda cleaned the pipes.
Dean: Jo, you got options. No one in their right mind chooses this life. My dad started me into this when I was so young; I wish I could do something else.
Jo: You love the job.
Dean: Yeah, but I'm a little twisted.
Jo: You don't think I'm a little twisted, too?

Jo Harvelle joins the Winchester brothers on a hunt in Philadelphia, Pennsylvania, even though her mother has forbidden her from hunting.

Jo Harvelle tells the Winchesters about disappearances in an apartment building in Philadelphia. The brothers go to investigate, and despite being forbidden to do so by her mother, Jo joins them. They discover the building is being haunted by the spirit of H. H. Holmes

, who kidnaps young blonde women and imprisons them in a sewer. Jo is taken by the spirit, but is saved by Sam and Dean. They trap Holmes in a ring of salt and then bury him in concrete. All is not well, though, because Jo's mother has found out what Jo's been doing and is furious. As they fight, she reveals to Jo that her father was working with John Winchester on a hunt when he was killed. Upset, Jo shares this information with Dean and tells him to leave.

For this episode = only 1 human.