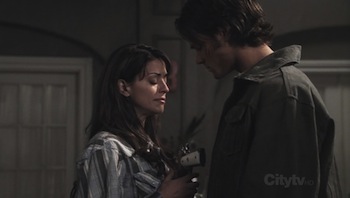 This is the way you can save me. Please. I'm asking you to save me.
I’m sorry, man, but what about "a human by day, a freak animal killing machine by moonlight" don’t you understand? I mean, werewolves are badass.
— Dean
Advertisement:

Sam develops feelings for a woman he meets while he and Dean investigate violent deaths in San Fransisco, California thought to be the work of a werewolf.

after the bitten and slashed body of a lawyer, Nate Mulligan, is found in his office with a missing heart. Sam's research reveals that over the last several years the deteriorated bodies of prostitutes working Hunters Point

have washed up in the bay without their hearts. Dean and Sam interview Nate Mulligan's assistant, Madison, at her home as her neighbor, Glen, is dropping off a casserole. She tells them that her boss could be flirtatious when he was drinking, and that her ex-boyfriend, Kurt Mueller, had punched her boss because he thought something was going on between them. Madison also tells them that Kurt is stalking her, and was at a bar they had gone to after work on the same night that Nate died.

Dean and Sam search Kurt's apartment, where they find claw marks sliding from Kurt's balcony along the side of the building to the ground. They hear a gun shot and find a police officer who has been torn apart in a nearby alley. Sam and Dean go to check on Madison. After Sam defeats Dean in rock-paper-scissors, he gets to stay with Madison while Dean goes to Kurt's workplace. Sam and Madison start to talk and are clearly attracted to each other, while Dean tracks Kurt down at a strip club. Dean follows Kurt to his apartment, and waits outside watching his window and balcony. When the nearly-full moon is high in the sky, Dean hears a shattering sound and sees that the glass door to the balcony is broken. He runs into the building and into Kurt's apartment, where he find Kurt dead with his chest torn open. Kneeling over the body is Madison, but she has blood-stained fangs and long claws. She also has increased strength and agility, which she demonstrates by tossing Dean against the wall. Dean drops his gun but is able to pull a silver knife out of his jacket and wound Madison below her right elbow. Madison recoils from the silver and leaps out the shattered window and off the balcony. However, Dean was injured badly enough he passes out.

Dean awakens as the sun rises and calls Sam to let him know Madison is the werewolf. Sam walks into Madison's bedroom and finds her still asleep, but he sees the wound from Dean's silver knife on her arm. Sam ties Madison up, but she denies knowing anything about being a werewolf. Sam convinces Dean that they have to try to cure Madison by killing the werewolf who bit her. Dean goes to hunt the werewolf who was killing prostitutes at Hunters Point, while Sam guards Madison in case she transforms. Dean manages to shoot the werewolf as it attacks a prostitute. Before the werewolf dies, it transforms back to the human form of Glen, Madison's neighbor. While Dean is hunting Glen, Madison transforms into a werewolf, but Sam is able to barricade her in her a closet until morning. When he opens the door to the closet in the morning, Sam tells Madison it should be over and she will never see him again. Madison looks around and sees the scratch marks and missing plaster on the walls around her. She realizes Sam was telling her the truth and she transformed into a werewolf, but when she looks up Sam has left.

Dean and Sam wait outside Madison's apartment in the Impala to make sure Madison does not transform now that Glen is dead. Madison recognizes the car, and invites them to wait inside with her. The moon rises and sets with Madison staying in human form. Dean leaves to go back to the motel room, leaving Sam and Madison together. Madison kisses Sam, and they make love. That night, Sam and Madison fall asleep together, but when Sam wakes up he sees Madison in werewolf form. She jumps out the window before he can stop her. Sam goes to the motel where Dean is staying and tells Dean that Madison is still a werewolf. Madison, who has returned to human form, calls Sam's cell phone, and Sam and Dean pick her up from Middle Point Road and take her home.

Madison is horrified to realize she likely killed someone after she transformed during the prior night. Sam argues that they have to keep looking for a cure, but Dean explains to Madison that there is no known cure for being a werewolf and it is likely that she will hurt more people when she transforms in the future. Madison begs Sam to shoot her with a silver bullet because she does not want to hurt any more people, and she can't kill herself. Dean offers to do it instead of Sam, but Sam insists he should do it. Madison walks into her bedroom, and Sam follows her with tears running down his cheeks. A few seconds pass...and then a gunshot is heard off screen from Madison's bedroom, which causes Dean to flinch. Cue credits.

For this episode = 3 humans and 2 werewolves. This includes the second death of a Love Interest for Sam.