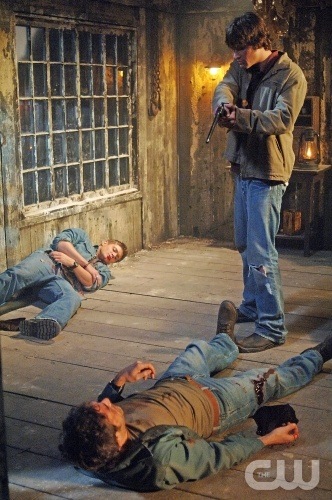 You shoot me in the heart, son!
The storm's coming, and you boys, your Daddy—you are smack in the middle of it.
—Bobby Singer

Sam and Dean seek out the help of an old friend, Bobby Singer, in Sioux Falls, South Dakota

, where the demon Meg manages to find them.

To get some help after their father is abducted, Sam and Dean visit Bobby Singer, an old family friend who runs Singer Salvage Yard and a low-rent "mission control" for hunters in the field. Meg tracks them down, but in coming after the brothers she gets caught in Bobby's "devil's trap", a pentacle within a circle with a series of symbols, all of which work together to trap certain supernatural creatures. Once Meg is captured, they realize that Meg Masters is actually an innocent young woman who has been possessed by a demon from Hell. The brothers and Bobby exorcise the demon from Meg, but without the demon's power she succumbs to the injuries she received falling seven stories in Chicago. She is able to give them John's location before she dies.

, to rescue their father and retreat to a cabin to regroup, but it turns out that the Yellow-Eyed Demon is now using John as a meatsuit. As he tortures Dean, John temporarily manages to regain control and begs Sam to use the Colt, killing him and the Yellow-Eyed Demon at the same time, but Sam can't bring himself to do it and shoots John in the leg instead. The demon flees, and the brothers are taking John to the hospital when the Impala is run off the road by a trucker possessed by one of the Yellow-Eyed Demon's servants.

For this episode = 2 humans and one demon.