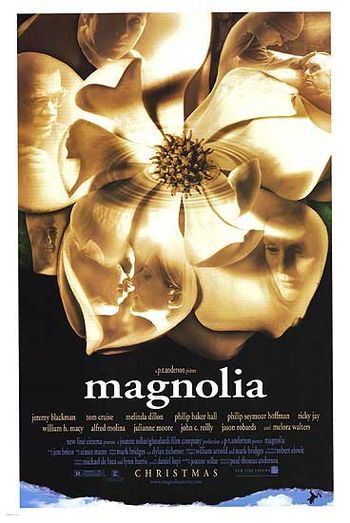 Magnolia is a 1999 drama film written and directed by Paul Thomas Anderson about dysfunctional people in Los Angeles, partly inspired by the songs of Aimee Mann. The film is known for focusing on a large number of characters through a series of interlocking stories, being over three hours long, having possibly the most non-sequitur third-act twist of all time, and getting Tom Cruise an Academy Award nomination.

A 30-year-old Patton Oswalt appears as Delmer the blackjack dealer in one of the opening vignettes.

The title refers to the flower, which have many petals going off in different directions, but which are all connected in the back.