Rain of Something Unusual 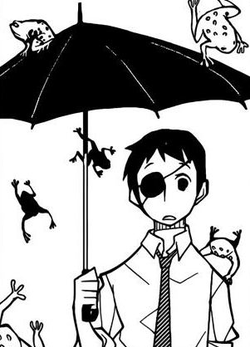 A flash frog warning is in effect for the area.
Usually, when it rains, you'd expect water. Occasionally, you'd expect ice (in case of blizzards, flurries and hailstorms).
Advertisement:

But not here—instead, it's something that you would never expect to rain from the sky. It could be raining money, or raining food, or literally raining cats and dogs, etc. This can have any number of justifications—maybe it's not a normal world in that work's verse, maybe it's an act of a divine being (or other magical being), maybe somebody modifies the weather in... a unique way, etc.—but for most of the time it's the Rule of Funny.

Note that this isn't the same as someone flying (whether by himself or on a vessel) and drops things while flying (whether Santa dropping presents or a plane dropping bombs); however, when a rain of something unusual is thought to be a weird rain and turns out to be someone dropping things from the sky, it's a subversion of this. Rain of meteors also doesn't count here.

Subtrope of Weird Weather. Supertrope to Rain of Blood, Rain of Arrows and Storm of Blades. Compare Alien Sky, when something unusual shows up in the sky regularly; and It's Raining Men, where a great number of people deliberately fall through the sky to land on the ground (typically via parachute or some other equivalent), giving the visual impression of this trope when done in sufficiently large numbers (especially if they're being viewed by someone to whom the very concept of parachuting is exotic).

Pin wonders what would happen if Coiny and Nickel make contact, and it turns out that it generates a portal that erupts with money.

Pin wonders what would happen if Coiny and Nickel make contact, and it turns out that it generates a portal that erupts with money.