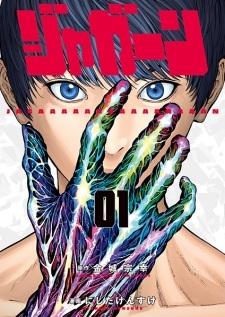 Jagaaaaaan is a Supernatural Action-Horror Seinen manga written by Kaneshiro Muneyuki which utilizes Body Horror in the spirit of Tokyo Gore Police combined with an unique artstyle, provided by Nishida Kensuke. It ran in Big Comic Spirits from 2017 to 2021.

Shintarou Jagasaki, who is a neighborhood police officer, lives with his girlfriend while working a job that is killing him slowly with annoyance. It looks like he will end up marrying soon and live a boring life with a nuclear family - a grim future for a guy with dreams! One such day, a mysterious monster appeared on the train and he suddenly can shoot with his right hand like Master Buppanatsu, the eggplant mascot of his city!

However, trouble piles up at the horizon as he discovers how the monster on the train wasn't the only one loose in the city...

Tropes this Manga include: