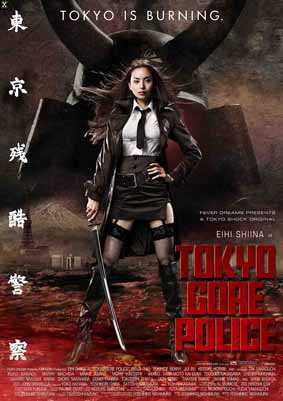 The use of the word "gore" in the title is very, very appropriate.
Advertisement:

In 2008, Yoshihiro Nishimura, fast making a name for himself amidst those the likes of Noboru Iguchi, Shinya Tsukamoto, Takashi Miike and Yudai Yamaguchi (and like them, probably more so abroad in the West than in Japan itself), decided to break ahead from being a mere artist of gore effects and take the reins of a film all of his own.

It is 20 Minutes into the Future. Tokyo has became a cyberpunk dystopia with a privatized police force, where blades for cutting one's wrists are advertised on television and civilians can partake in the execution of prisoners via remote control from their homes. Going around murdering prostitutes is a mad scientist called "Key Man", who has created a race of mutants called "Engineers" whose injuries immediately transform into bio-mechanical weapons. By resurrecting those he murders as Engineers, Key Man is amassing himself a small army. The police officers are finding themselves hard pressed to deal with Key Man and his mutants.

One such police officer is Dark Action Girl Ruka, whose habits regarding her wrists would put Ebony Dark'ness Dementia Raven Way to shame. Ruka has been such a soul since her father was assassinated on the day the police were privatized many years ago. She now seeks to find her father's killer so that she might avenge him.

What ensues is almost two hours-worth of decapitation, dismemberment, disembowelment, katana, chainsaw duels, penises that double as guns, vagina monsters that eat people, breasts that squirt acid and people propelling themselves into the air with spouts of blood among other things... Let us just say that the word "Gore" isn't in the title for the hell of it.