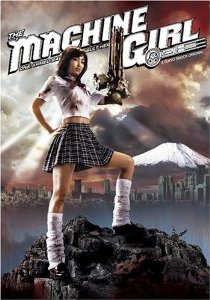 A 2008 Japanese Film about a very cute college girl, Ami, who seeks vengeance for her slain little brother, with gruesome spectacle. Yoshihiro Nishimura did the gore effects for this movie before going on to direct Tokyo Gore Police.

A Darker and Edgier and Denser and Wackier reboot, titled Rise of the Machine Girls, was released in November, 2019, directed by Yuki Kobayashi and produced by Nishimura, without the involvement of original director/writer Noboru Iguchi.