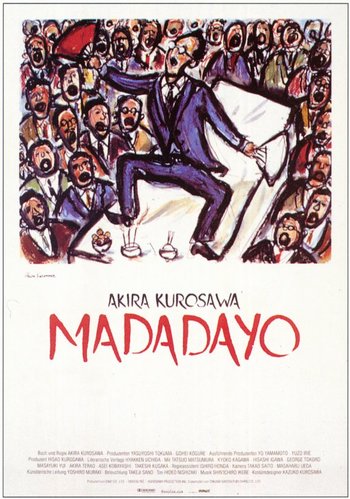 Mādadayo ("Not Yet") is a 1993 film from Japan directed by Akira Kurosawa.

. The film opens in 1943, with "Hyakken Uchida", nearing his 60th birthday (the real Uchida was at this time 54 years old), retiring from teaching German to write full-time. Although he doesn't teach anymore he is still beloved of his students. They come to visit him at the house he rents. That house burns to the ground in an American bombing raid, leaving Uchida and his wife living in a tiny gardener's shack, on the grounds of an enormous mansion which also burned down in a bombing raid. His former students proceed to buy him a house, and then they buy the lot next door to make sure that Uchida has a nice view.

After the war, his students begin throwing him annual birthday parties which they call "Not Yet Fests". At the birthday parties, the students ask him if he's ready to die, singing "Mada kai?" (Are you ready?), a saying traditional to Japanese hide-and-seek. Uchida, by custom, downs an enormous glass of beer and sings "Madadayo!" ("Not yet!).

Akira Kurosawa's last film, directed when he was 83 years old. Although the themes of aging and defiance in the face of mortality are certainly appropriate for Kurosawa's last film, this wasn't specifically intended to be his last. Kurosawa wrote two more screenplays which were delayed by his declining health and were eventually filmed by other directors after Kurosawa's death in 1998.