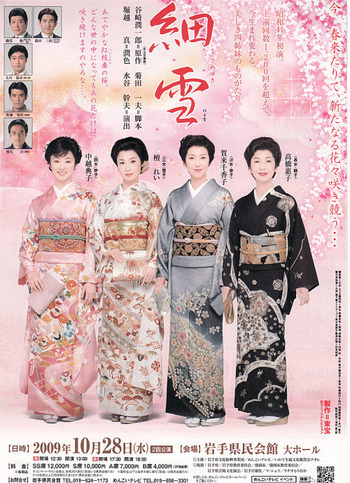 "If epic literature is based in the dramatic and forward-moving narrative of a male hero's journey, The Makioka Sisters is a female epic of inaction—trying to figure out what to wear, crying for no reason at the same time every afternoon. With each perilous, pathetic step, the sisters are heroes setting out for the new world. They're like Odysseus, except without the ship and without the sea."
—Reviewer Emily White on The Makioka Sisters.
Advertisement:

The Makioka Sisters is a highly regarded Japanese novel by Jun'ichiro Tanizaki telling the story of the four sisters of the Makioka family. The first part was originally serialized during World War II but the book as a whole was only fully published after the war due to running afoul of wartime censorship. The action takes place from Autumn 1936 to April 1941.

Sachiko, the second sister, is the novel's main viewpoint character. Loosely based on Tanizaki's wife, she is outwardly brisk and businesslike but in fact very introspective and conservative. Sachiko spends most of her time trying to find a husband for the third sister, Yukiko, who is thirty years old at the beginning of the novel and subtly being deliberately as unhelpful as humanly possible to register her displeasure with the situation and desire to stay with her sisters and niece rather than be forced to move away with an unfamiliar man. The youngest sister, Taeko, is something of a problem child and her amoral and acquisitive behavior makes it harder to get Yukiko a match.

The eldest sister, Tsuruko, has been Demoted to Extra since before the beginning of the main plot and mostly appears to pass judgment on the other sisters' actions, although she and Sachiko maintain a positive relationship most of the time.

Tsuruko and Sachiko are both married. Sachiko's husband, Teinosuke, is the most prominent male character in the novel; Tsuruko's husband, Tatsuo, is judging by other characters' reactions the closest thing the novel has to an antagonist. Sachiko's daughter Etsuko is also prominent, as are some of Taeko's boyfriends.

There is no central driving plot.

A film adaptation, directed by Kon Ichikawa, was made in 1983.