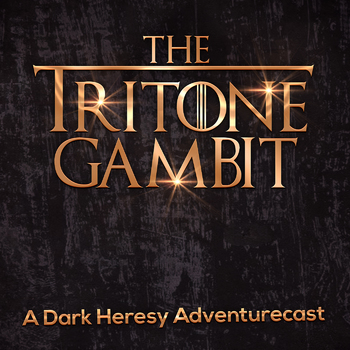 Are you ready to confront The Tritone Gambit?
"Welcome to the Caesin Sector, a recently settled region of space on the galactic north-east. Discovered by the Rogue Trader Cladius Fivreaous Harron, the sector has been undergoing rapid colonization as the Imperium lays claim to its resources. But frontiers are dangerous, and not only from without. The Inquisition is the shadow organization charged with rooting out the more subversive threats against the Imperium of Man, and a newly colonized sector requires the creation of infrastructure to support such duties. The hastily formed Caesin Conclave has called in every favour available to it to swiftly establish itself in the sector. With the lack of Inquisitorial Agents, several newly recruited acolytes have been dispatched to the Caesin Sector to assist..."
— The Introduction, "Ep. 08 – The Archive – Chapter 01"
Advertisement:

The Tritone Gambit is an adventurecast featuring six friends playing Dark Heresy , the now-discontinued Warhammer 40,000 RPG. The story follows a group of young recruits in the Inquisition, a shadow organisation that defends the Imperium of Man from threats without and within, as they run errands throughout a recently colonised part of space. But as time goes on, they start uncovering mounting evidence of that something is not quite right...

Can be found on iTunes

Members of the group have also played one shots of other games, such as Dungeons & Dragons.

The Tritone Gambit provides examples of: