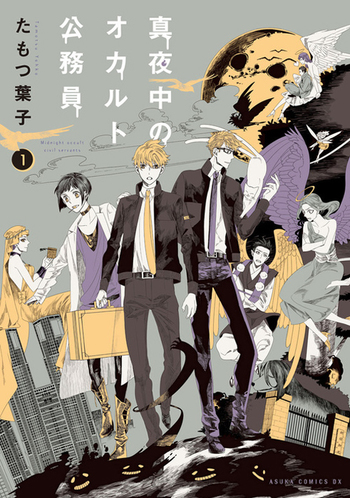 Midnight Occult Civil Servants (known as Mayonaka no Okaruto Kōmuin in Japan) is a 2015 Urban Fantasy manga, which also includes a 2018 novel and 2019 anime TV adaptation, written by Yōko Tamotsu and published under Kadokawa Shoten with 10 volumes being published. The anime is being streamed by Crunchyroll (with cooperation from Funimation with an English voice track) in English and in Mandarin Chinese by bilibili.

The manga takes place in modern times where the Japanese government establishes various Nocturnal Community Relations Divisions in Tokyo's 23 wards to police and oversee any problems with the supernatural, known officially as Anothers. To cover up any incidents, they work closely with the Tokyo Metropolitan Police Department's Section Zero.

Miyako Arata is the newest recruit to work in Shinjuku's NCRD. Working under Kyoichi Sakaki, his job is to mediate and resolve any conflicts among various Another species while investigating any occult crimes committed in the city. With the help of a skill called Ears of Sand, used to understand the Another language, Miyako and his colleagues work to keep the peace in Shinjuku and prevent any events from affecting the city.

The official site is here.