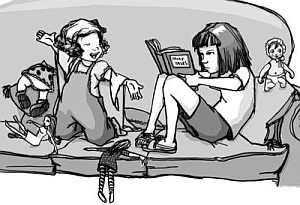 A self-important kid with a serious attitude problem.

Sometimes a younger sibling, other times an older one. Talks a good game but often falls into trouble and needs to be rescued when that isn't the job of The Chick. Hates being called a kid but lacks real maturity. Often a boy, but female examples aren't uncommon. Such a character seldom gets along with anyone, except The Hero. The getting along part always happens after The Hero gives him/her the slap across the face or the fatherly/motherly spanking that the kid needed badly.

Unlike the Mouthy Kid, the Bratty Half-Pint isn't the voice of reason of the party but rather a troublemaker who likes to get on people's nerves through sass or sabotaging their plans. At their best, they're small, mischievous annoyances or Attention Whores. At their worst, they're a huge pain in the ass, a millstone, made even worse because they enjoy being that way.

If overdone and excessively obnoxious the brat risks becoming The Scrappy to some of the audience. Often the party's attack magician if there isn't a Black Magician Girl. They may also use a slingshot. Attempts to insult people usually descend to Big, Stupid Doodoo-Head. Might also be a case of Motor Mouth if the kid is the kind to never shut up.