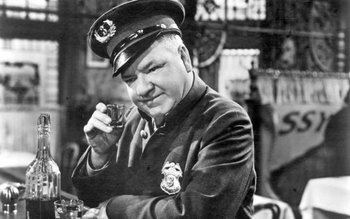 W.C. Fields in his native habitat.
Boy in bank: Mommy, doesn't that man have a funny nose?
Mother in bank: You mustn't make fun of the gentleman, Clifford. You'd like to have a nose like that full of nickels, wouldn't you?
Advertisement:

The Bank Dick is a 1940 film directed by Edward Cline, written by and starring W. C. Fields.

Fields is Egbert Sousé, a bumbling, alcohol-sodden, minimally employed father in Lompoc, CA, who is cordially despised by his wife, mother-in-law, and two daughters. One day, quite by accident, Egbert stumbles across a bank robbery in progress, and is mistakenly believed by the townspeople to have subdued one of the bank robbers and recovered the $50,000 they got away with. The bank manager rewards him with a job as a security officer at the bank. Egbert convinces Og the bank clerk, also his would-be son-in-law, to steal $500 from the bank to buy some shady shares in a silver mine. Egbert and Og panic when the bank examiner shows up immediately after they buy the shares—but the other bank robber shows up again as well.

Una Merkel plays Egbert's daughter Myrtle. Shemp Howard, who a few years after this film would rejoin his brothers in The Three Stooges, plays Joe the bartender.