Video Game / The Legend of Heroes: Trails from Zero and Trails to Azure 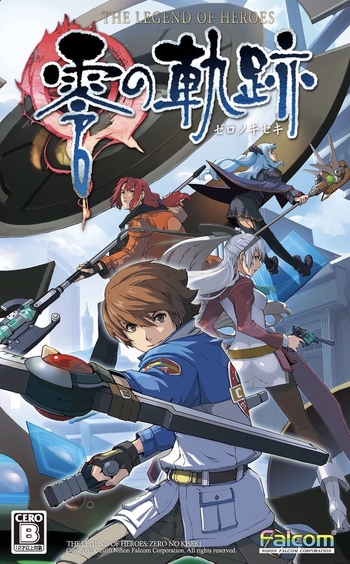 Welcome to Crossbell.note Foreground to background: Lloyd Bannings, Elie MacDowell, Randolph “Randy” Orlando, Tio Plato.
The beginning of the second arc of the Trails Series after the Trails in the Sky trilogy, The Legend of Heroes: Trails from Zeronote 英雄伝説 零の軌跡 (Eiyuu Densetsu: Zero no Kiseki) in Japan moves the setting to the bright lights of the wealthy-but-corrupt city of Crossbell. Four rookie cops are enlisted to improve the police's reputation by joining a new division, called the Special Support Section. Of course, it doesn't stop there...
Advertisement:

One of the game's unique points in comparison to the rest of Trails is its intense focus on Crossbell City as a setting. Unlike the other arcs in the series, which have the player bounce around a number of different cities across a country, Crossbell City is gigantic and makes up a substantial portion note Crossbell City itself makes up about 50-60% of the explorable area of the entire game. While you will eventually leave the city limits to travel to other parts of the wider Crossbell State, these all really serve as "suburbs" of the city and the focus is on Crossbell City itself, in all its grand, towering, corrupt, decadent glory. When combined with series staples like orbments (this series' equivalent of technology), it creates a fairly unique "Urban Fantasy in The '50s" atmosphere. The only really comparable games would be the Shin Megami Tensei games, and even then there's a lot of differences in tone and content.

The game got a sequel called The Legend of Heroes: Trails to Azurenote 英雄伝説 碧の軌跡 (Eiyuu Densetsu: Ao no Kiseki) in Japan, featuring the same characters and directly continuing the plot. Tropes for both Zero and Azure are listed here. Together, these two games form what is often referred to by fans as the "Crossbell Duology/Crossbell Arc"; this is the second arc in the Trails series, after the Trails in the Sky trilogy. The third arc is the The Legend of Heroes: Trails of Cold Steel quadrilogy, whose first game was released in September 2013 (December 2015 internationally). In-between Azure and that game, the spin-off game The Legend of Nayuta: Boundless Trails was released.

On December 18th, 2019, Falcom announced that an Updated Re-release of both Zero and Azure for the PlayStation 4, alongside announcing an upcoming title to be set also in Erebonia, which ended up being The Legend of Heroes: Trails into Reverie - effectively an epilogue to both the Cold Steel quadrilogy and the Crossbell duology. This announcement renewed the hope of fans that the Crossbell arc will eventually be published in the west. The PS4 ports came out in April and May 2020 for Zero and Azure respectively. A Nintendo Switch version for Hong Kong, Taiwan, and Korea, courtesy of Clouded Leopard Entertainment, came out in 2021.

On March 15, 2020, a group known as The Geofront released an extensive Fan Translation patch for Zero, with a fully edited script intended to match the style of the English translations of the other titles in the series, and other modernization enhancements, including turbo mode, autosaves, a message backlog, higher framerates and resolutions, the ability to add in song arrangements and voice-acting from the Evolution re-releases, and various bug-fixes. Later updates changed terminology to match the localization of Trails of Cold Steel IV, which was unreleased when the patch originally came out, and added upscaled FMVs. A final major update was released on May 17, 2021, five days ahead of a similar patch for Azure, to not only further bug-fix but update graphics and backport a feature from Trails to Azure. The Geofront's work was so high-quality and so consistent with XSEED Games and NIS America terminology that eventually, it allowed NIS America to finally officially localize the duology

. This, of course, means the patches are no longer available, with NIS America releasing Zero on September 2022note the 27th in North America, 30th in Europe, and Azure set to come out in 2023.

A Drama CD titled "Road to the Future" that serves as an Interquel between the end of Zero and the start of Azure has also been released. A subbed version

has been released online.

" and "If Cecile Got Angry

" detailing the lives of the first four SSS members before the events of Zero is also released, but is only recently translated. Read the first chapter here