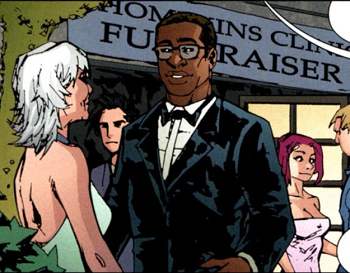 A society dance held to raise funds for charity. Often an important part of the social season, as wealthy folk feel better about their wasteful extravagance if some of the money is going to the deserving impoverished or suffering people. If it's less formal, it may be combined with a Bachelor Auction, and often there will be a "theme" such as "Casino Night" (less dancing and more gambling, with all the house profits going to the charity).
Advertisement:

A very common twist in fiction is for criminals to attempt to steal the proceeds; this was almost the entire use for charity balls in Pulp Magazines and Golden Age Comic Books. In aid of this, the Charity Ball may also be a Masquerade Ball to make it easier for the crooks to infiltrate.

In romance plotlines, it's a chance for the heroine to see some important personality traits of her prospective love interests.

A Sub-Trope of Dances and Balls. Compare Fundraiser Carnival. Not a snowclone of Idiot Ball.