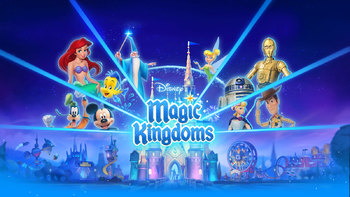 Build the Disney Park of your dreams!
Disney Magic Kingdoms is a world building simulator (similar to The Simpsons: Tapped Out) developed and published by Gameloft that is based on Disney Parks. Released on March 17, 2016, the game is available for iOS, Android, and Microsoft Windows.note Windows 8.1, Windows 10, and Windows 10 Mobile; Windows Phone 8.1 was previously supported
Advertisement:

This mobile and computer game allows players to build their own unique Disney theme park. The story behind why they could so is because Maleficent has placed a powerful curse on the park, ridding it of all its attractions, characters (except for Mickey Mouse), and most importantly, its magic. Merlin comes in and finds that there is still magic in the park, it just needs to be found. With the magic around the park, it's up to the player to rebuild the Kingdom, welcome back the Disney, Pixar, and Star Wars characters, lift the Kingdom's curse, and stop Maleficent's takeover.

Magic is earned through tapping on attractions and concessions that players place and lift curses from throughout the park, as having characters complete various activities (i.e. tasks), or through running parades. Magic is used to expand the park (by freeing various areas from the curse), place more buildings, start parades, and (alongside the various special tokens that players must also collect) welcome characters to the park. Of course, once players begin lifting the curse, guests will come back to have some fun again, so players must also make their park's guests happy by granting their wishes (i.e. having them ride attractions or have the characters do specific activities for the guests). There are also gems to earn and purchase as premium currency, which allow players to complete activities faster or unlock premium content such as special attractions or characters (including certain limited-time characters).

Advertisement:
Disney, Pixar, and Star Wars characters in the game
Bolded names are premium characters. All characters are grouped based on the in-game character collections and how they appear in the characters menu from left-to-right.