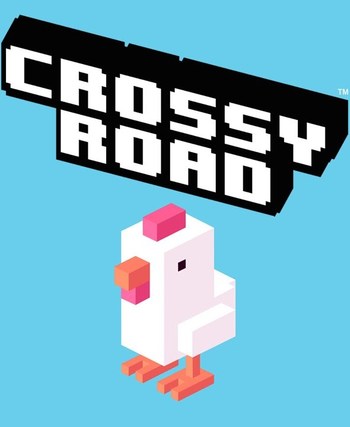 ...to get to the other side.
Advertisement:

You remember how addictive Flappy Bird was, with its simple, see-how-far-you-can-go gameplay? Remember how challenging Frogger was as you tried to safely cross a busy road and turbulent river? Now, imagine those two concepts put together, and add several Secret Characters for you to collect. Oh, and if you love Disney, there was a version of this game (released on March 28, 2016) that features many of the company's characters, too. (In fact, the Characters tab above is actually for characters that appear in this version.) However, that game has now been removed from all app stores, with all in-app purchases disabled. Disney Crossy Road ceased to be playable on March 12, 2020.

See The Crossing Dead for its zombified spin-off.