Literature / Casey at the Bat 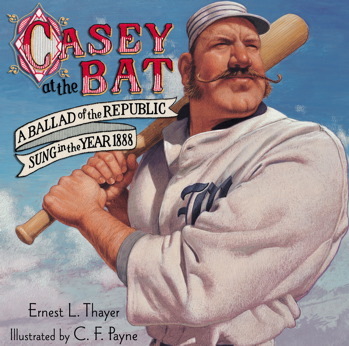 Penned by Ernest Thayer in 1888, Casey at the Bat is a longform poem describing a typical baseball game, wherein the fans of the "Mudville Nine" are rooting for their beloved hitter Casey to win the game for them. An iconic poem in the annals of baseball history, it is possibly the Ur-Example of Down to the Last Play.

A game of baseball is taking place in the fictional town of Mudville. It's the bottom of the ninth inning and there are two outs, with the score four to two against Mudville. The fans are hoping their hero, Casey, can get to bat because he's the team's star player and known for his exceptional hitting. The two batters before Casey manage to get to second and third base, sending Casey up to bat to score the winning hit. However, Casey wants to look like an even bigger hero, and intentionally lets the first two pitches go by as strikes. On the third pitch, Casey swings with all his might, but misses the pitch, causing him to strike out and making Mudville lose the game.

The poem is in the public domain. Read it here.

Tropes found in "Casey at the Bat":