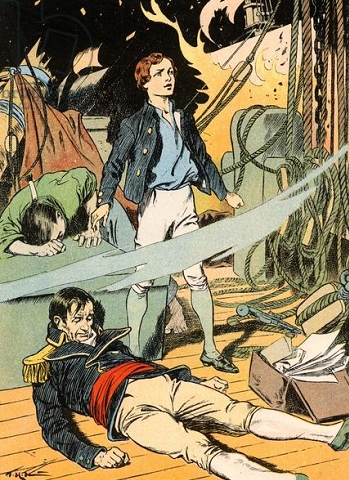 Here's looking at you, kid.
The boy stood on the burning deck
Whence all but him had fled;
—The (in)famous opening lines, "Casabianca"
Advertisement:

"Casabianca", also known as "The Boy Stood on the Burning Deck", is a British narrative poem by Felicia Dorothea Hemans that was first published in the Monthly Magazine issue for August of 1826. It concerns itself with the final moments of Giocante Casabianca, the young son of Captain Luc-Julien-Joseph Casabianca, aboard the Orient during the Battle of the Nile. Because the poem has been militantly pushed to generations of children in English classes and because its composition is nothing short of melodramatic, "Casabianca" is well-known but regarded with derision. As such, there are countless parodies and some of those, notably "Casabazonka" by Spike Milligan, are better known than the poem itself.

The Battle of the Nile is a historical confrontation between the French Navy, led by François-Paul Brueys d'Aigalliers, and the British Navy, led by Horatio Nelson, that took place from the 1st to the 3rd of August 1798 at Aboukir Bay in Egypt. In short, Napoléon Bonaparte sent out ships to get a foothold in Egypt. The British got wind of that and sent their own ships to be a bother. The British managed to miss the French, thereby giving the latter time to instigate the Battle of Embabeh and to come up with a counter strategy. While Aboukir Bay was not ideal for naval combat, as it left the French with minimal manoeuvrability, the plan was to form an impenetrable line in order to ensure protection to the troops on land. However, not only was there enough space at the end of the line for a British ship to sneak past, measures to prevent the British from passing between the French ships were not carried out. Because the French had only prepared the starboard sides for combat, they were sitting ducks when attacked on the other side. Add to that food shortage and Bedouin hostility on shore, and things weren't looking good for the French.

The Orient was the flagship of the fleet and under command of Brueys and Casabianca. Mere hours into the battle, the Orient caught fire. British gunfire prevented the crew from extinguishing the flames until, eventually, it reached the ammunition supplies and the Orient exploded, probably twice. The crew had counted more than a thousand men, but fewer than a hundred survived the gunfire, the fire, the explosion, and the waves. Brueys, Casabianca, and Giocante, aged between ten and thirteen, weren't among the survivors. For one reason or another, several rumors emerged among the British shipmen pertaining the exact circumstances of Giocante's death and they ascribed a heroic element to the boy's final moments, such as that he was last seen trying to save his father.

These rumors formed the inspiration for Hemans's poem, but "Casabianca" doesn't match any of them and is Hemans's own invention. After all, the second line assures the reader that Giocante is alone and if he was, who would've relayed the poem's story? "Casabianca", despite being ten stanzas long, is uneventful and owes its length to the tragedy whipped up around the end of a young and admirable life. The first three stanzas establish Giocante's grandeur and impending doom, the next four describe Giocante's futile attempts to contact his father, and then the final three focus on the ship's destruction to communicate the boy's death.

"Casabianca" is an accessible poem and its themes of heroism and life at sea are meant to appeal to youngsters. That's one part of why it became part of the English curriculum. The other part is that it has use as a Propaganda Piece. It links heroism to obedience and it challenges its British audience not to be outdone by the enemy in terms of discipline.