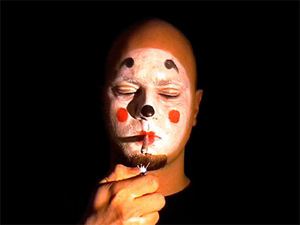 "Make it dark, make it grim, make it tough, but then, for the love of God, tell a joke."
— Joss Whedon
Advertisement:

Bathos is a story-telling technique that follows serious ideas with the commonplace or ludicrous. The juxtaposition of these ideas creates humor.

It has its origins in poetry, where lofty prose would be followed with an anticlimax of sorts. It later evolved to cover any instance where the serious is mixed with the surreal or commonplace in order to provide humor.

The trope name comes from Alexander Pope, who wrote Peri Bathous, Or the Art of Sinking in Poetry in 1727, in which he mocks the abuse of tropes and figures of speech by bad writers. In it, he notes that juxtaposing the serious and the trivial creates unintentional humor, which sinks serious poetry. As such, unintentional bathos is considered Narm.

Bathos most often appears in intentionally comedic works or those with a comedic undertone, like that of Surreal Humor, although not always. On the Sliding Scale of Silliness vs. Seriousness, works of bathos either sit firmly in the middle or wildly slide up and down. Bathos may cause Mood Whiplash when it does not appear in an otherwise comedic segment of the work.

Compare Gallows Humor, where the comedy is used by characters within the story as a tension breaker, and Mood Dissonance. See also the First Law of Tragicomedies, a method of averting this. Also compare Failed Attempt at Drama when a character tries to be dramatic but fails hilariously. Related to Straight Man and Wise Guy, where the straight man provides the seriousness and the wise guy the wackiness, to general humorous effect.

Please do not place examples that better belong on Narm here or on any main page. Likewise, do not confuse with Narm Charm, where a dramatic moment still works, in spite of being unintentionally silly. In other words, only intentional bathos belongs on this page.