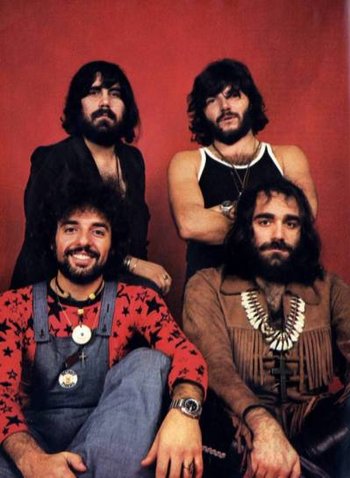 Aphrodite's Child, early 1970s. (Clockwise from left: Vangelis, Loukas Sideras, Demis Roussos, Anargyros "Silver" Koulouris.)
You should come with me to the end of the world,
Without telling your parents and your friends.
You know that you only need to say the word,
So end my play with the end of the world.
But I know that I'll go away by myself,
I feel you don't want to come.
"End of the World"
Advertisement:

Aphrodite's Child was a Greek rock band based in Paris, France. The band consisted of a bunch of musicians (most notably Demis Roussos and Vangelis Papathanassiou) who were already successful in Greece, but they decided to flee to London after the junta of 1967. Since they couldn't get a visa to enter Britain, they decided to work in France instead.

While they started as a Psychedelic Rock influenced pop band à là Procol Harum or The Moody Blues, their last album 666 (1972), which was a seminal Progressive Rock album is the one which is best remembered (albeit as a Cult Classic, and only among prog circles). The scope and ambition of this double album was what caused the demise of the band. While Vangelis wanted to make more music like it, Roussos and Sideras wanted to keep the band's sound mainstream. There was also the problem of their record company not wanting to release the album because it was too avant-garde for commercial radio.

After they disbanded, Vangelis found success making film scores and Demis Roussos became a successful pop singer, who was very popular in Europe and Middle East during The '80s. Roussos' music is largely forgotten nowadays, but he had many hit singles back in the day.

While they remained a cult group, they were influential on bands such as The Verve, Beck and Enigma. Their music was noticed by Yes frontman Jon Andersonnote Who later collaborated with Vangelis, and he loved 666 so much, he offered Vangelis to become their keyboardist after Rick Wakeman left the band. He couldn't join Yes because of visa problems and Patrick Moraz joined Yes instead.

The First Trope is Red: