Comic Book / The Coming of Galactus 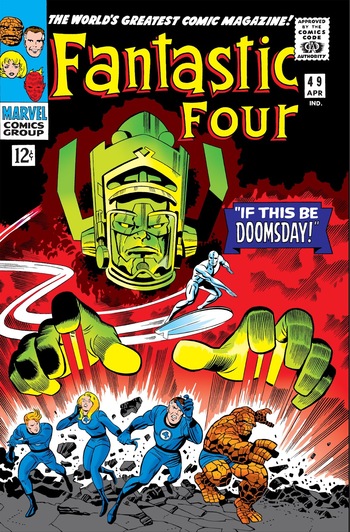 The Coming of Galactus is the first story of Galactus, made by Stan Lee and Jack Kirby at their prime. It ran through issues 48-50 of Fantastic Four.

After meeting the Inhumans, the Fantastic Four are returning home, and find all kind of weird events going on. Fire in the sky, rocks in the sky; all caused by the Watcher, in his attempt to hide planet Earth from the Silver Surfer. The Surfer does not fall for it, discovers the planet, and summons Galactus. Galactus plans to consume the energies of the planet to feed himself. Fighting him is useless, so the Watcher sends the Human Torch to Galactus' home to retrieve a weapon that may destroy the universe. Richards threatens Galactus with it, and rather than risk destruction, he agrees to leave. But before doing so, he banishes the Silver Surfer on Earth, for opposing his will.

The events of this storyline are retold in the last two issues of The Marvel Saga: The Official History of the Marvel Universe, along with the origins of Galactus and the Silver Surfer. The storyline was adapted in 2007 on film as Fantastic Four: Rise of the Silver Surfer.

This storyline provides examples of...