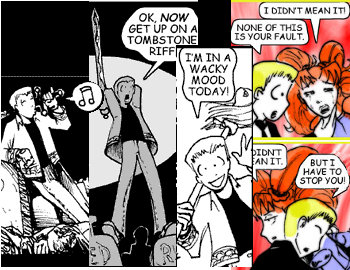 a month of each-other.
"This show literally starts with all of those darker underpinnings right alongside the zany humor, and all that really changes is what is at the forefront shifts."
— Victor Mayboroda regarding Chrono Crusade
Advertisement:

There are many reasons why the tone of a story may change. Sometimes a happy, joke-based show goes into a much more serious and darker direction. Sometimes a once dark and deadly serious series turns into a comedy. Sometimes the work completely changes its genre. Sometimes writers run out of ideas and just try to put out anything they can, or find what they really want to do. Sometimes Executive Meddling, Creator Breakdown, or Creator Recovery takes the story in a new direction and turns it into something completely unrecognizable from its source material.

And sometimes all of it happens at the same time.

Cerebus Rollercoaster is what happens when Cerebus Syndrome gets zig-zagged — the series goes back and forth through different tones, jumps from genre to genre or dances on the Sliding Scale of Idealism vs. Cynicism. If this ends well, the series can end up Growing the Beard by absorbing the best elements of all the phases it went through. If not, it may end up Jumping the Shark.

This may occur for different reasons. Sometimes creators just plain don't know exactly what tone they want to give their work. Maybe the story went too far into Cerebus Syndrome, and the writer is tired and horrified of the Crapsack World it has become, but while trying to reverse the process, he finds out that new, Darker and Edgier settings have a lot of fans, so he desperately tries to balance drama and comedy to keep both fanbases happy. Sometimes the new writer decides to take the series in a new direction, then into another direction and so on, until fans who have grown to be writers themselves take the series back to its original roots. Some people may just Follow the Leader too much, and when the leader changes, so too does the direction of their story. And sometimes they just don't want to stick to one setting and are forced to discard all story ideas which are too dark or too light for basic settings. Tropes Are Tools — when played right, it may give a series a unique, recognizable style and keep it fresh. If done badly, however, this will pretty much turn the story into a train wreck.

Compare Mood Whiplash, which is a smaller version of this taking place within a single story rather than spaced out among multiple installments. Dude, Not Funny! may occur if one character is lagging between transitions.