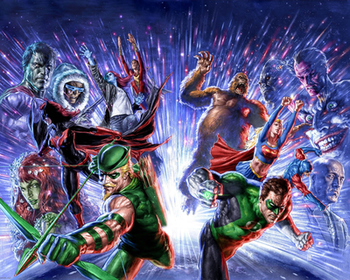 Cry for Justice, in stores now!
(Assorted classic villains not included.)
Ray Palmer: Have you ever had a sinus headache? So torturous you thought your head would explode? What if I shrank to microscopic size, entered your skull, then began to grow. Imagine how that would feel.
Killer Moth: You're heroes, you don't act that way.
Ray Palmer: (points to the other Atom) He's a hero. I'm Ray Palmer. Welcome to pain.
— An exchange between a hero seeking "justice" and a villain.
Advertisement:

Take a drink every time you see the word "justice".

Justice League: Cry for Justice (2009-2010) is a seven-issue limited series written by James Robinson with one purpose in mind: to make a team that actively seeks justice rather than merely responding to the need for it. However, this only creates a thin line between Justice and Revenge.

The story takes place after Final Crisis, where Green Lantern Hal Jordan begins to lose belief in what the team is fighting for, particularly justice. He and Green Arrow quit the Justice League and begin to hunt down villains and ensure that people like Libra would never take flight again.

Meanwhile, numerous superheroes mourning the deaths of their friends all begin to think the same and wish for the same thing: justice. They join one another and decide to, as a group, attempt to bring justice to the world. Little do they know that this is going according to the plan of one villain: Prometheus.

The series was originally planned to be an ongoing series and reinterpretation of the Justice League of America series and team, but DC executives eventually shortened it to seven issues, with the various characters and plot lines followed up in other series.