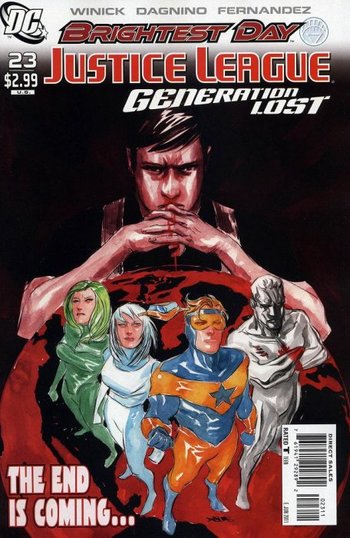 "I thought you should be a team again. The world needs you."note -Maxwell Lord
Advertisement:

Justice League: Generation Lost was a 2010 limited series primarily written by Judd Winick and Keith Giffen, with art by a variety of artists. It was part of Brightest Day.

The plot centers around the return of Maxwell Lord, erstwhile sponsor of the Justice League International, murderer of Ted Kord, and the mastermind behind the OMAC project. Brought back by the White Light Entity with the task of preventing Magog from inciting the events of Kingdom Come, Lord uses his powers to erase his existence from the memories and records of everyone on earth.

He mostly succeeds, but four heroes, all from the former J.L.I., remember him: Captain Atom, Booster Gold, Fire, and Ice. They soon realize that Lord is willing to sacrifice his alleged friends and innocent civilians in pursuit of his goals, but with him actively working to discredit them, they have to fight not only against the forces of darkness, but their own friends and allies. They team up with legacy characters Blue Beetle and Rocket Red. But are they foiling Max's plans? Or playing right into his hands?