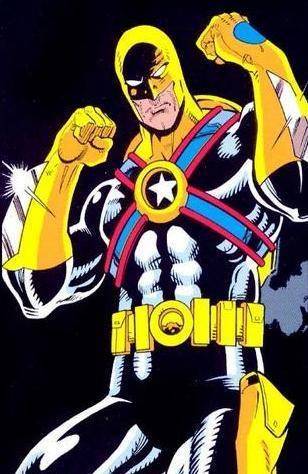 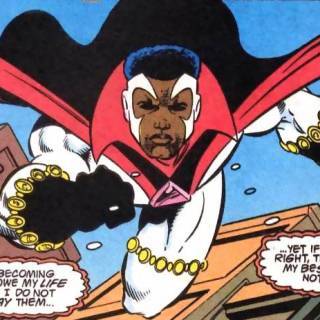 Abilities: Sorcery, communes with the dead 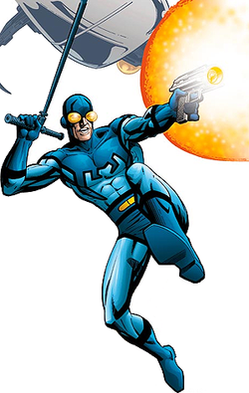 Ted Kord was a student of archaeologist Dan Garrett and nephew of wealthy industrialist Jarvis Kord. Garrett uncovered a plot by Jarvis to unleash a horde of killer robots on the world and revealed to Ted that he was in fact the masked hero, the Blue Beetle. Dan destroyed Jarvis' androids but died in the battle, passing on the mantle of Blue Beetle to Ted. As the Blue Beetle, Ted was invited to join Justice League America by Max Lord, where he became best friends with Booster Gold and together they got into all kinds of wacky hijinks; both of them later joined Captain Atom's "Extreme Justice" team. Tragically, Ted was murdered by Max Lord when he uncovered the OMAC Project, but not before he relayed the information to the Justice League, helping them put an end to Lord's machinations.
See the Blue Beetle page for more. 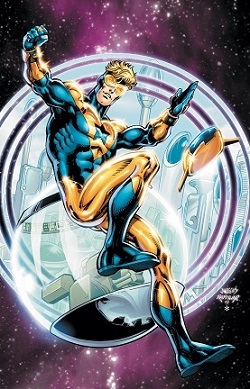 Born in the 25th century, football star Michael Jon Carter was ruined in a gambling scandal. Seeking a new life, he stole some high-tech equipment and fled back in time to our era, where he set himself up as the first for-profit superhero, Booster Gold. Booster joined Justice League America shortly after its reconstruction under Max Lord and became best friends with the Blue Beetle (with whom he got in trouble many times with his get-rich schemes). Despite his glory-seeking nature, Booster still (usually) pulls through and does the right thing.
See his own page for more. 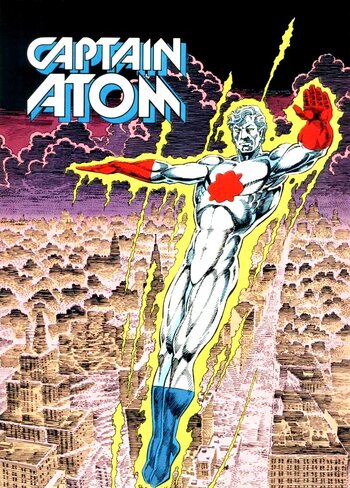 Captain Nathaniel Adam was the subject of a secret military experiment that granted him incredible powers, but catapulted him decades into the future. After arriving in the present era, "Captain Atom" became an agent of the U.S. government. He was appointed to Justice League International as America's official representative to counter the Russian superhero, Rocket Red. Eventually, he grew tired with the League's reactive tactics and formed his own Justice League, unofficially known as "Extreme Justice".
See his own page for more. 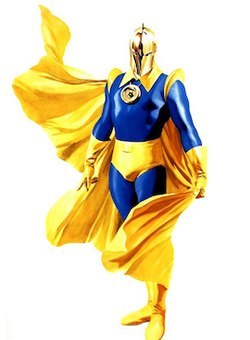 The master mystic of the Justice Society was one of Justice League International's charter members, but only served briefly before the magic that kept him from aging failed and he died of old age. At this point, Fate was a merging of his original incarnation, Kent Nelson, and his wife, Inza. Their legacy passed on to Linda and Eric Strauss.
See his own page for more. 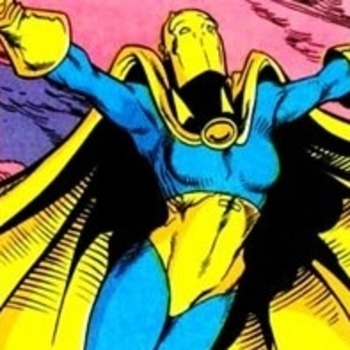 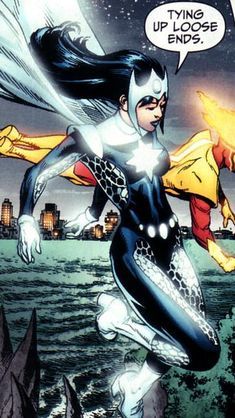 Japanese physicist Kimiyo Hoshi was granted power over light energy by the Monitor during the Crisis on Infinite Earths and played a vital role in saving the universe. Afterwards, she became a member of Justice League Europe and, after moving to the United States, the Justice League of America. Kimiyo has a cold exterior, but is good at heart, especially where her children are concerned. She has clashed several times with her evil predecessor, Dr. Arthur Light. 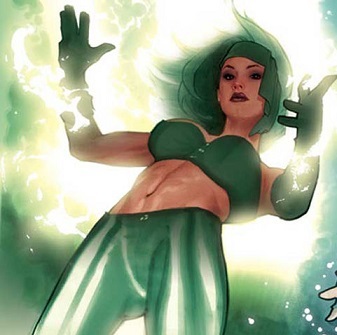 A former Brazilian secret agent, Beatriz da Costa gained mystic power over fire and joined the Global Guardians as Green Flame. Here she met her lifelong friend, Tora Olafsdotter, aka Icemaiden. When the Justice League went international, they joined the team as Fire and Ice. She has also been a member of the international spy organization Checkmate. 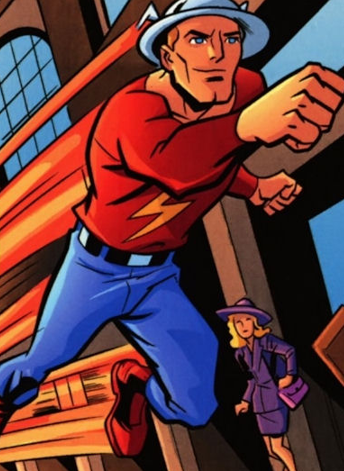 The original Flash was the leader of Justice League America for a brief time. He served in the role temporarily to help instill a sense of teamwork and leadership in the disorganized team.
See The Flashes character sheet for more. 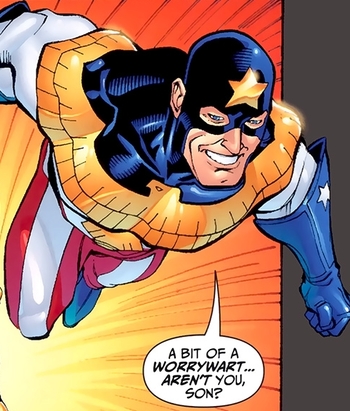 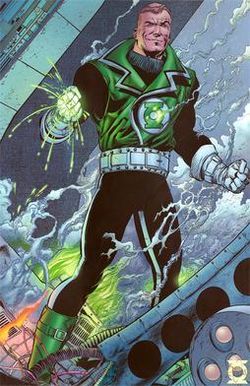 This roughnecked Green Lantern was one of the charter members of Max Lord's JLI. His crude and hot-tempered personality put him at odds with the rest of the team, though he somehow managed to win over the Shrinking Violet Ice and he acted polite in the presence of General Glory. He quit the team in a huff due to his jealousy toward Superman.
See the Green Lantern Corps character sheet for more. 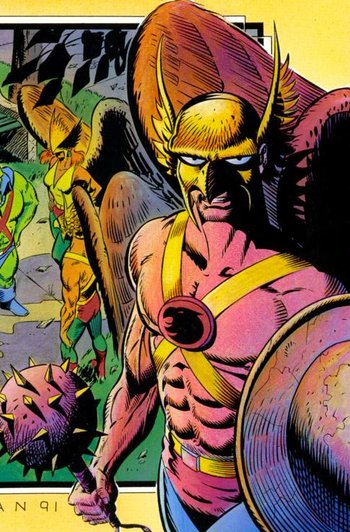 A Thanagarian spy stationed on Earth in preparation for an upcoming invasion, Fel Andar presented himself as Carter Hall, Jr., the son of the original Hawkman. When his partner, Hawkwoman (an Unwitting Pawn), discovered his ruse, he killed her and fled back to Thanagar.note This was a Retcon. Before the Hawkworld miniseries, the JLI's Hawkman was Katar Hol, the same Hawkman who had been with the Justice League since the Silver Age.
See the Hawkman character sheet for more.

A human woman brainwashed into the role of Hawkwoman by the Thanagarian invasion force, Sharon Parker uncovered her husband Fel Andar's plot and revealed him to Maxwell Lord and the Martian Manhunter. In retaliation, he killed her.note Like Hawkman, the JLI's Hawkwoman was originally the Silver Age character Shayera Hol until Hawkworld Retconned history.
See the Hawkman character sheet for more. 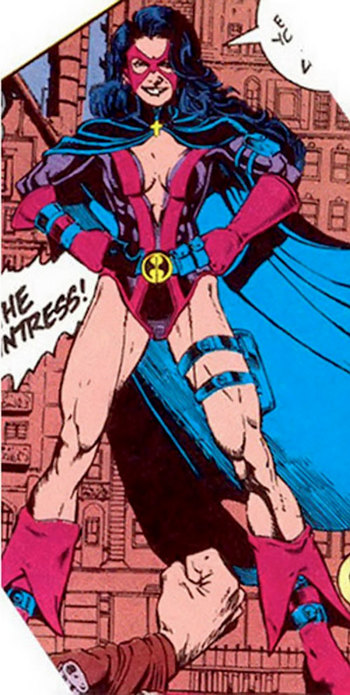 See her own page for more. 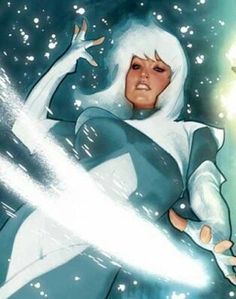 Tora Olafsdotter is the heir to a clan of Norwegian Roma, and her heritage gives her power over ice. She debuted as the superheroine, Icemaiden, taking the name from Sigrid Nansen, another ice-based heroine whom she replaced in the Global Guardians. She became close friends with Green Flame, and they later joined the Justice League International, changing their code-names to Ice and Fire. She began dating Guy Gardner, but the relationship was rocky due to his hot-headed nature, the fact that Fire hated him, and her sublimated attraction to Superman. Ice was killed by the Overmaster, but was resurrected under strange circumstances and resumed her relationship with Guy. 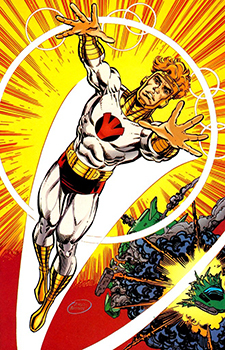 AKA: Sollis
Abilities: Light generation and manipulation, and flight. 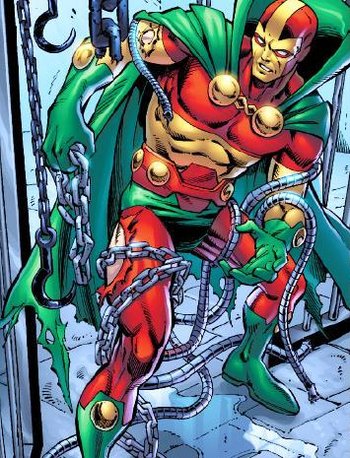 The son of Highfather, but raised on Apokolips as part of Highfather's peace treaty with Darkseid. Darkseid left him to the mercies of Granny Goodness, who did her best to break his spirit — and failed. He eventually escaped and settled down on Earth with Big Barda.
See New Gods characters page for other info. 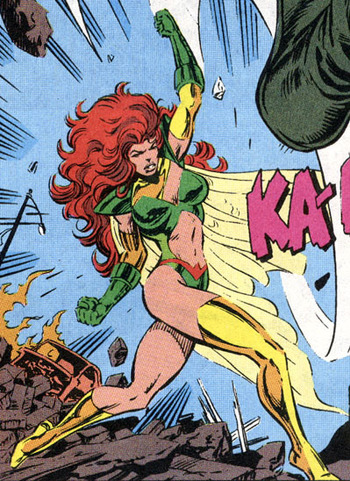 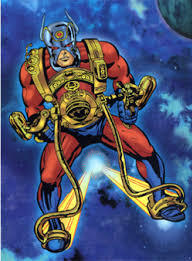 The New Genesis God of War. The son of Darkseid, but raised on New Genesis as its greatest champion according to the terms of Highfather's peace treaty with Darkseid.
See New Gods characters page for other info. 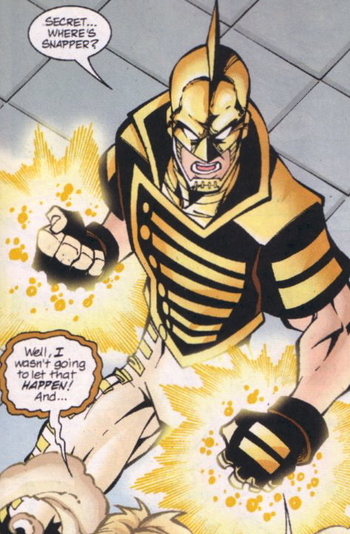 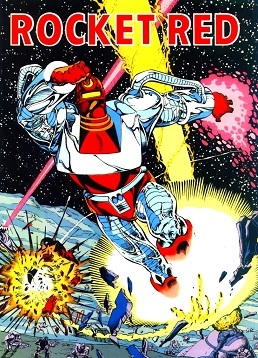 This jovial Russian soldier was chosen to replace the traitorous Vladimir Mikoyan on Justice League International's roster. Dmitri was a fan of Western culture who nonetheless devoted himself to Russia's military. He became close friends with Animal Man, with whom he bonded when he learned they were both family men. Years later, Dmitri sacrificed his life to save his former JLI cohorts from rampaging OMAC cyborgs in the prelude to Infinite Crisis. 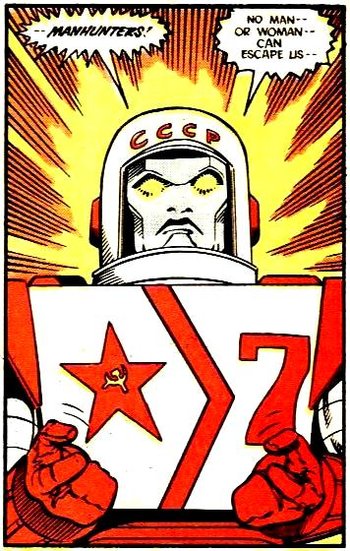 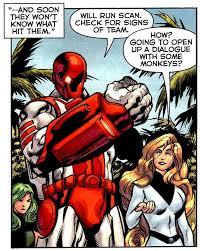 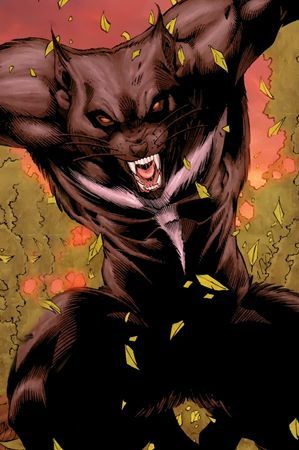 A hero from Australia, Hugh Dawkins was born with the mutant ability to morph into an aggressive, furry monster. After saving his father's life, he decided to become a superhero. Dawkins was a member of the Global Guardians before joining the JLI. His most notable adventure with them was helping the League fight his former team, who had been brainwashed by the Queen Bee of Bialya. He left after Ice's death due to the team's disorganization. He has continued to work with the Global Guardians worldwide and solo in Australia.