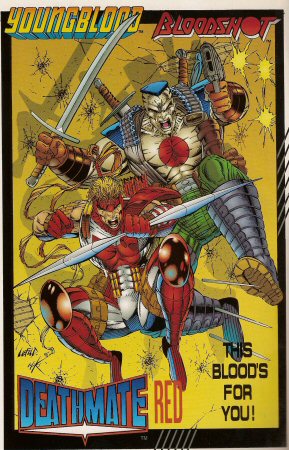 "It got ridiculous. You'd get these lists with names that we'd never, ever use, and you could tell the other guy just went through a laundry list of stupid-ass names. That's where a thing like Blood Tears would come from."
— Image Comics co-founder and Top Cow president Marc Silvestri at the 2012 Emerald City Comic Con.

Part of the Dark Age of Superheroes involved making not only their appearance, morality, and demeanor Darker and Edgier, but also their names. Heroes born during the nineties ditched the Something Person Naming Conventions and took a page from Names to Run Away from Really Fast, using names both scary and trite.

Most names became one word, usually gritty, edgy, and trendy. At times, two words were merged into a single name, usually including some combination of Dark, Blood, or a verb for killing. Because substandard literacy is kewl, they are occasionally misspelled in clever ways like Darkchylde, Stryker, or Blüdwulf — which, not coincidentally, also makes the names easier to trademark.

Characters surviving from this time period may have to struggle with sounding dated, but then again, surviving the nineties hopefully means they have more to them than just boasts of Badassness.

See also Fad Super. Contrast The Adjectival Superhero. May prove to be an Atrocious Alias - either in their time if they seem overblown or ridiculous, or later as trends change - and as such can end up as an Audience-Alienating Era for the character who once bore such a name.