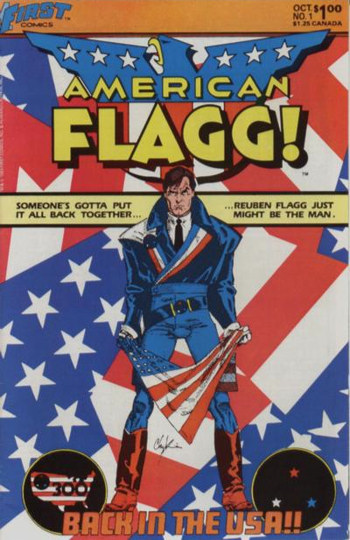 American Flagg! is a comic book created by Howard Chaykin for First Comics. The series ran from 1983 to 1989.

A little backstory... 1993 (the Year of the Domino), after a series of world-wide crises, the U.S. government (and the corporations that ran it) relocate to Hammarskjold center on Mars ("Temporarily, of course") while the corporatist Brazilian Union and Communist Pan African League become the world's super powers.

Flash forward to the year 2031, and the U.S. government is now "The Plex," whose Tricentennial Recovery Commitee is supposed to get America "Back on track for '76" but is in fact a plot to sell off the country, composed of arcologies dubbed Plexmalls with a police force dubbed Plexus Rangers to keep law and order (such as it is). Enter Reuben Flagg, former vid star assigned to the Chicago Plexmall. Reuben has a somewhat idealistic view of America, but upon arrival, finds himself mired in violence and corruption.

American Flagg is legendary among fans of '80s independent comics for its revolutionary panel design, which has made it a heavy influence on the generations of creators that came along afterward.