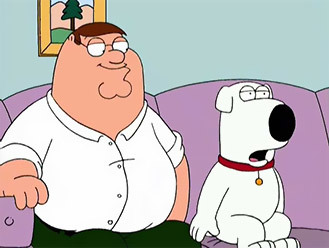 Pet characters in most works are Nearly Normal Animals, whether with the ability to talk in Animal Talk or not. These animals, however, are just animals, not intelligent beings like humans.

This trope, on the other hand, is about pets who are intelligent and able to interact with their owners (usually a human, but can be a human-surrogate animal or alien) on the same level. Sometimes these pets are actually smarter than their owners and choosing to hide it, other times they are open about being sapient beings and are accepted as part of the human world as well as their own world.

Pets that shift between humanoid and "pet" forms do not go here and should be under Anthropomorphic Zig-Zag instead.

There are several variations on this

Not to be confused with Anthropomorphic Zig-Zag. Sister trope to Sapient Steed. See also Civilized Animal, Funny Animal, and the Sliding Scale of Anthropomorphism. Supertrope of Human Pet. Related to Amplified Animal Aptitude and Intellectual Animal. Many Weasel Mascots fit this trope too.

Sapient Pets That Masquerade as Normal Pets Around Some Humans

Examples That Show More Than One Variant