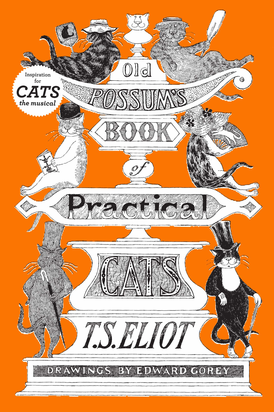 A collection of cat poems written by T. S. Eliot. They were largely written for his godchildren, and are thus rather more whimsical and cheerful than his more famous poetry. Nonetheless, it does contain Eliot's gift for allusions and sharp observations. The first edition, published by Faber and Faber, also featured his own illustrations. Other versions included illustrations by Edward Gorey.
Advertisement:

Eliot's poems describe a number of curious and most singular cats, all of whom encompass common (if exaggerated) aspects of feline behaviour. Unlike its more famous adaptation, the musical Cats, the poems have little connection with one another, and there is no overarching storyline.