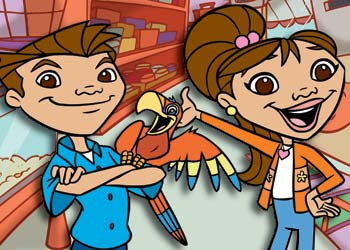 It's sad when your parrot is wiser than you are.
Advertisement:

Maya & Miguel (2004-2007) is an American educative animated 65-Episode Cartoon about the misadventures of 10 year-old Hispanic siblings. As the Expository Theme Tune states, they are "brother and sister and best friends as well." The series seeks to make Hispanic culture more familiar to the youth audience and also teach some Spanish words in the process.

Maya Santos is an energetic preteen girl of Hispanic descent who can't resist helping people with their problems even when not asked to; this invariably causes trouble but her brother Miguel, despite pointing that out, always ends up helping her anyway. Everything ends well by the end however. The series seems set in the real world; the only unusual sight is how Maya's hair bobbles glow whenever she has an idea, but that seems to be visible only to the viewers.note Though there was an instance of Miguel's shoe glowing yellow in the first season's title sequence. Perhaps a scrapped Wonder Twin Powers idea? Her catchphrase is "Eso es!" ("That's it!")note Though often sounds like excellent!

Other characters in the series include their parents, their grandmother, their friends (which include a white boy with only one arm) and Paco, a talking parrot.

Tropes seen in the series: