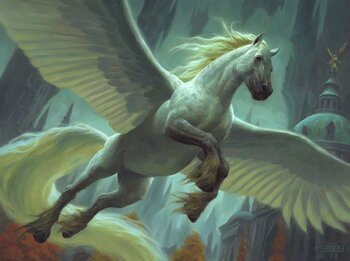 "Pegasus" is the name of the winged horse in Greek Mythology, born from the blood that flowed when Perseus slew Medusa. He was then used by Bellerophon to slay the Chimera. Since then, the image of a horse with wings has persisted in stories and culture, whether these horses are named Pegasus or another name. "Pterippi", a portmanteau of the Greek words "pteron" ("wing") and "hippos" ("horse"), is fairly common, and is in fact a redirect to this page.

By far the common appearance these creatures have is that of an all-white horse with bird wings, following the original mythical incarnation, sometimes with colored highlights on their feathers for visual variety. These are typically noble and benevolent beings that live away from common society, but may serve as steeds for particularly good-hearted heroes. Less commonly, they may have batlike or draconic wings; these tend to have black fur and are more likely to be evil or "perverted" beasts.

Such stories may turn Pegasus into a whole species, even though there was only ever one of them in legend — although descriptions of entire species of winged horses, termed "pegasi", turn up as early as Roman bestiaries and geographies.

A Sub-Trope of Cool Horse; usually a White Stallion to boot.

A Super-Trope to Winged Unicorn.

A Sister Trope to Unicorn, Winged Humanoid and Our Hippocamps Are Different.