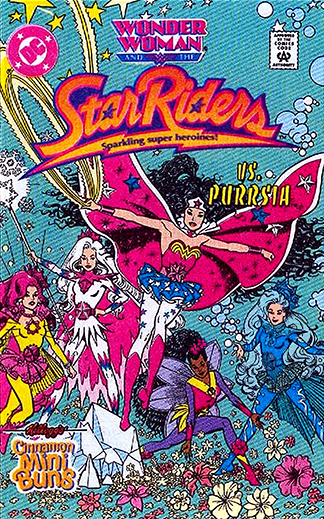 Wonder Woman and the Star Riders was a promotional comic distributed in Kelloggs cereal for a line of toys and an animated series which were never produced, making it the only part of a planned but cancelled DC Comics and Mattel franchise which was actually completed and put into production. Of the five Star Riders Wonder Woman, Dolphine and Ice were new iterations of existing DC characters, while Star Lily and Solara were new creations for the stillborn franchise.
Advertisement:

This fifteen page comic follows the Star Riders, led by the Amazon Princess Wonder Woman, as they track down the thief Purrsia who has stolen their magical Star Jewels. After they reclaim their jewels and capture the villainess they are distracted by a sudden violent storm outside their floating castle fortress and Purrsia escapes, re-stealing Solara's star jewel on her way out.

The unused toy designs were repurposed by Mattel for their Tenko and the Guardians of the Magic line. Years later the concept of a Mattel produced toy line accompanying a Merchandise-Driven show centered around Wonder Woman would resurface and come to fruition as DC Super Hero Girls.