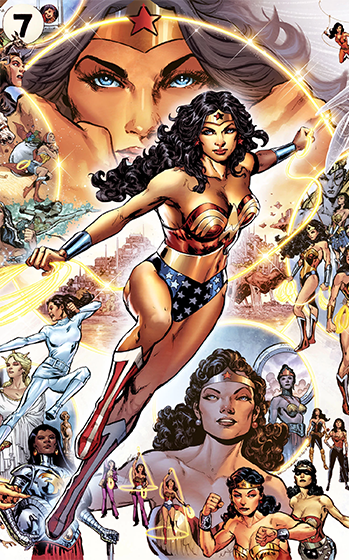 Sensation Comics Featuring Wonder Woman is a (primarily) Web First Anthology Comic that was published by DC Comics from 2014 to 2016.
Advertisement:

The book had a fairly unique concept with each creative team being given relative free rein as all their tales were "continuity free" and were not intended to fit into any DC reality but could take inspiration for their settings from any of them. Every story features a different unique version of Wonder Woman and a new creative team. Notable writers and artists who worked on the series include Gail Simone, Amanda Deibert, Phil Jimenez, Marcus To, Adam Hughes, Cecil Castellucci, Karen Traviss, James Tynion IV, Noelle Stevenson, and many others.

Most stories were one shots which went from start to finish in a single issue, but some took place over two to three issues.

For characters who act as key players see the Wonder Woman character sheet.