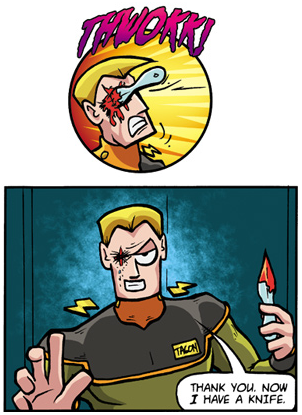 A character has been stabbed with a knife or some other bladed weapon and left for dead. Then, however, instead of just kicking the bucket, he suddenly pulls the weapon out of his body and uses it to fight back, firmly establishing himself as Made of Iron, Determinator or has a Healing Factor. Of course, the characters who pulls something like this don't neccesarily have to be human, they can be either undead, robotic or alien. Who may be able to easily shrug off any kind of harm involving being stabbed or impaled by sharp implements.

Note that in Real Life, this is a very bad idea because the knife sticking in the wound slows down the bleeding considerably. Pulling it out runs a high risk of bleeding yourself to death within minutes. Additionally, touching the lodged blade can result in you surviving the stab wound only to finish the job yourself by cutting into something important inside. For example, imagine that someone stabs you in the chest but manages to miss anything vital. You start yanking on the blade to try removing it and it creates a back and forth sawing motion, cutting right through a lung or massive blood vessel. Nice Job Breaking It, Hero.