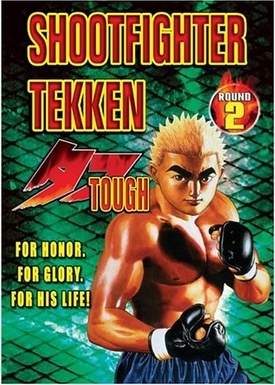 Shootfighter Tekken is a short anime OVA prequel of a manga called High School Exciting Story: Tough, which probably deserves its own page (or integrated with this one).

It follows the story of Kiichi "Kibou" (Kee-boh) Miyazawa, a young punk who is the only son of Nadashinkage Style's remaining few masters, Oton Miyazawa. Nadashinkage Style is a murderous martial art, borne near the end of Meiji-era Japan, and utilizes strikes to vital points and pressure points on the human body to cripple (or outright kill) opponents.

Neither Oton or Kiichi really have any desire to use this martial art to kill. Or really to do anything more than become stronger with it, really. But an old rival, Iron Kiba, is still simmering over his loss with Oton—he demands a rematch with Oton and threatens to expose Nadashinkage Style to the world if he doesn't get it. He sends flunkies one by one to harass them, and...well. It goes kinda downhill from there.