Film / The Loved Ones 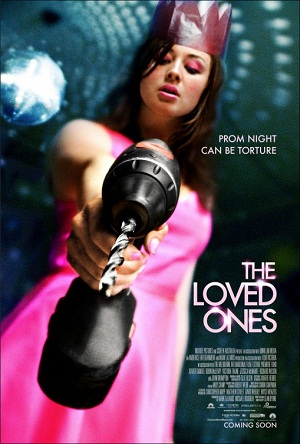 What Lola wants, Lola gets.
"Bring the hammer, Daddy."
Advertisement:

The Loved Ones is a Australian black comedy horror film written and directed by Sean Byrne in his feature directorial debut. It was screened at various film festivals during 2009 and 2010, eventually receiving a theatrical release in the United States during the summer of 2012 through Paramount's Insurge Pictures label.

While on an average everyday drive with his father, high school senior Brent Mitchell ends up swerving his car and is unable to regain control before it wraps around a tree. While Brent survives, his father dies in the crash, and his pain and guilt, worsened by his mother's subsequent emotional collapse, pushes him into a dark mental state.

Six months after the accident, the end-of-year school dance is on the horizon. Although Brent plans to go with his girlfriend Holly, he is approached one day by the meek, shy Lola Stone, and turns her down when she asks him to be her date.

She doesn't take it too well.

Brent gets abducted shortly after, and regains consciousness tied to a chair inside Lola's house, where she and her father (whom obsessively dotes over her) are throwing a dance of their own, and she plans on making her personal king pay dearly for rejecting her — with excruciating force.