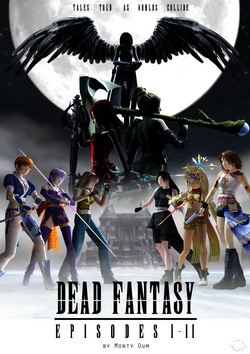 Warning! May cause awesomeness poisoning.
"You Haven't Seen Anything Yet..."

Dead Fantasy was a Fan Film series of CGI fight sequences, made by amateur filmmaker Monty Oum, creator of the Haloid crossover video. It stars the casts of Dead or Alive (+ Ninja Gaiden) and Final Fantasy (+ Kingdom Hearts) beating the stuffing out of each other in the most awesome ways imaginable.

Since mere words fail to properly describe it, watch it here.

Like everything else on the Internet it has its own wiki.

Most new updates can be found on its Facebook group.

Monty went on to work on Rooster Teeth Productions' flagship, Red vs. Blue, as well as the series RWBY. Unfortunately

, this meant that Dead Fantasy was put on the backburner.

With Monty's sudden and tragic passing in February 2015, whatever his plans were for Dead Fantasy died with him. However, another animator who goes by the name Uiyahan has announced his intention to remake the series in HD as a tribute to him; he has the first episode completed

and has a Patreon

for anyone who wishes to support the project.