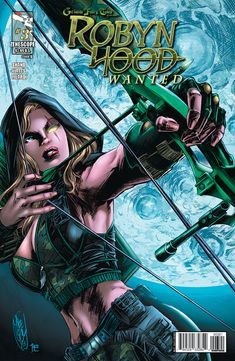 Robyn Hood is an updating of the Robin Hood legend from Zenescope comics, and is part of their Grimm Fairy Tales universe. It consists of the following comic book series:

The series begins as Shang, one of the guardians of Myst, storms a temple of cultists. After he is attacked and killed by a couple, he discovers a baby on an altar. He takes the child and confers with the Council of the Five Realms, who unanimously agree that the baby must be killed, lest she turn out the same as the Jabberwocky. Shang cannot bring himself to do this, believing that the child has the potential to live a better life and takes her to Earth where she is left on the doorstep of a family that will come to raise her. That family names her Robyn Locksley.

Sadly, the family is not without its own problems. Robyn's adoptive father is a deadbeat drug dealer who abuses both her and her adoptive mother, including forcing a very young Robyn to do drug deals for him. Robyn's mother is also gravely ill, and Robyn eventually turns to petty theft in order to pay for her mother's medication. After her mother loses her job, she and Robyn are unceremoniously kicked out of the house by her father. A few years after this, Robyn comes home one day only to discover that her mother has succumbed to her illness. She is put into foster care and bounces around the system until she ends up in a normal high school. By this point in her life, Robyn has made a point of standing up to those that use power to intimidate or the corrupt and in so doing makes herself an enemy to Cal King, a sociopathic spoiled brat whose father runs the town. Robyn steals his car in attempt to teach him a lesson, but Cal and his friends chase her down, forcing her to crash her car, and then proceed to brutally beat and gang-rape her before Cal cuts her left eye out. Meanwhile, a group of people in Myst desire a protector, and eventually using magic they reach out to her and pull her into Myst.

In Myst, Robyn is greeted by a mysterious woman who tells her that she will become what the people of the land require, but the woman is murdered before she is able to elaborate. She journeys through the kingdom of King John and discovers a wide range of poverty and despair. She begins to live off the land and after some time is confronted by Little John. She also soon meets his companions who become her group of Merry Men. They train for a while before deciding on a campaign of revenge, retribution and revolution against the evil King. She is captured after taking part in a contest but escapes and manages to kill the King, thus freeing the people from his tyrannical rule. She talks with a woman named Marian who directs her to a portal back to Earth.

Robyn returns to find the man that raped her, first killing his two best friends and then seemingly killing his father before confronting him. He shocks her by revealing that he had forgotten who she was and that him raping her was not even worth remembering. She drags him outside and kills him as well. When leaving she confronts two police officers and attacks them, but realizes although they were complicit in her rape that they are not exactly guilty either. Instead she gets them to call the sheriff in for backup who was partially responsible for a lack of justice in her case. She kills him and then leaves, though it is revealed that the father did not die. She travels to New York City and steals from a bank on Wall Street and throws the money in the air before leaving to discover herself after she realizes that her campaign of revenge has not left her satisfied.

On the run as an outlaw, Robyn eventually has an encounter with Britney (a.k.a. 'Red Riding Hood'), who attempts to bring her in. Their encounter ultimately ends in a stalemate with Britney agreeing to stop hunting her, but the truce will be void if Robyn kills another human. Robyn tells Britney that she knows that what she has done to get into this situation was not necessarily right, but she doesn't regret her actions, no matter how they haunt her.

With her record cleared following service with the organisation known as the Realm Knights, Robyn sets up shop as private investigator in New York City in partnership with Marian. The two of them handle cases no one else take; usually ones with a supernatural bent.

The comic appears to take place in the Cthulhu Mythos, as the Chtulu chant

is used by several characters to perform magic.